Sacramento Bee, Should State Adopt Lower Passing Score for the Bar Exam? Current One May Harm Students of Color:

A continuing decline in California’s bar exam pass rate is prompting nearly all of the state’s law school deans to call for an overhaul of the exam.

They suggest the state’s minimum passing score of 144 is too high, compared to the national average of 135, and disproportionately keeps African-American and Latino law graduates from entering the profession. They also say that California graduates who perform better than average, and who would have passed the bar in any other state, are failing in California.

The criticisms, included in a letter signed by 19 of the state’s 20 ABA accredited law school deans, follows the most recent July 2018 bar exam that saw scores fall to a 67-year low. Only 40.7 percent of test takers passed the exam, roughly a 9 percent drop since July 2017. California has seen more applicants fail than pass the exam since 2013.

At a time when the legal profession is looking to build diverse teams, the deans say the cut score of 144 — second highest in the nation — is too limiting for all applicants but especially harms minority graduates.

Newly released data, collected after the July 2018 bar exam, shows that if California adopted the national average, the number of African-American law graduates passing the exam would have doubled. 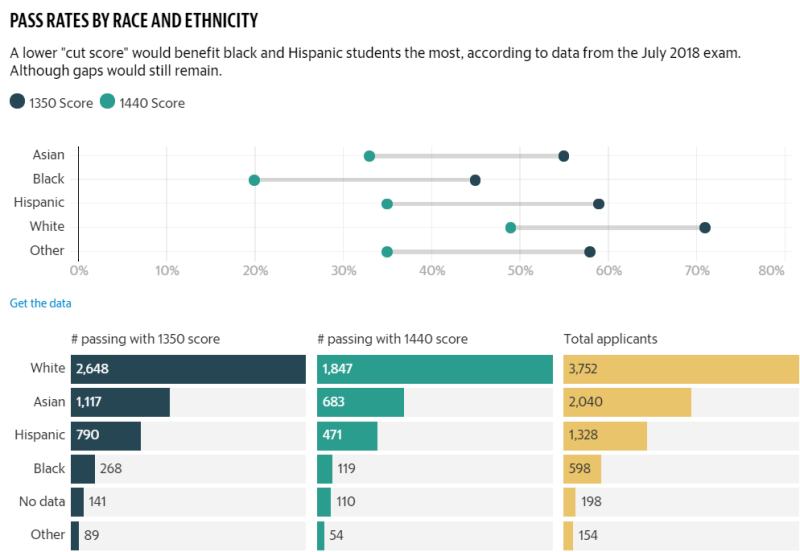 California’s cut score, established in 1985, draws a line “without a careful, empirically grounded basis to support it,” read a letter to the Supreme Court of California signed by the law school deans.

“More clients insist on having diverse lawyering teams, and this is an irony,” said UCLA School of Law Dean Jennifer Mnookin “We are this extraordinarily diverse state that is reducing the pool of good lawyers.”

Oregon and Washington lowered their cut scores, making California an outlier. Delaware is the only state with a score requirement higher than California’s at 145, but that state had 172 test takers compared with California’s 8,071 in July. ...

[M]any law schools, concerned about lower pass rates, are focusing too much on the exam to the detriment of students with interests in specialized fields, like cybersecurity or international law, that are not on the bar exam, critics say.

“Many are teaching for the bar rather than success,” Mnookin said. “It threatens to make legal education worse, not better.”

“I’m skeptical,” Mnookin said of this latest change. “In the real world, most of the time (lawyers) can look things up. Real life is not a closed book test, you can check in with someone. Of course you have to have the knowledge, but beyond that you need judgment.”

Separate but equal, height and strength tests, don’t ask, don’t tell . . . if the purportedly “objective” standard has a statistically proven disparate impact on a constitutionally protected class, the law doesn’t strike the standard, but it does shift the burden to the employer (or state) to prove that the standard has a valid relationship to performance. The current article makes the prima facie case for statistical disparate impact based on race/ethnicity. It isn’t that this isn’t allowed. However, the burden shifts back to the California Supreme Court to provide evidence that there is a valid public protection or competency-based reason to use 1440 when the national standard is 1350. If the Court does not have evidence to prove-up 1440, then current law says that if an alternative standard exists that has less disparate impact, it must be considered. Over a million attorneys are currently licensed and practicing in the US who have passed a bar exam at 1350. The existing national data shows no relationship between attorney malpractice or discipline and bar exam passing scores lower than 1440. In fact, California has one of the highest rates of attorney discipline while states with some of the lowest cut scores have the lowest rates of attorney discipline. If the Court can prove that 1440 has a valid constitutional purpose, it should remain. If it cannot, it should be bound by the equal protection clause of the Constitution to consider an adjustment. See my additional thoughts at the following TaxProf Blog post http://bit.ly/2D3XkMM.

Good idea, if your goal is to make sure anyone thinking of hiring a minority attorney wonders if they are hiring someone who would not be a lawyer without lower standards.

If there's one thing we need, it is more unqualified attorneys.

Well, why not make the bar exam cutoff low enough that everybody passes? That would be great, wouldn't it? I might be able to pass it without even going to law school. Cool!

Except, what is the purpose of the bar exam? Isn't it to make sure that anyone admitted to the bar has at least a minimum knowledge of the law so he can adequately perform the duties of a lawyer?

This may benefit black law students get a license but how does it benefit their potential clients? Doesn't the bar have a professional responsibility to safeguard the public? I would not hire a lawyer who barely passed their bar exam, just as I would not hire an electrician who barely passed his exam in basic competence or fly with a pilot who could only enter a cockpit if they rigged the exam to pass.

Why not lower the cut-score, but start providing successful applicants' scores to add excellence in quick recall and reasoning that the bar exam measures, to the fields of study the transcript shows, and the general difficulty, institutional culture etc. that the school name shows, among the diverse qualifications that clients crave?

Quote: "Johnson said he thinks California should work toward a reasonable cut score, but said he hopes to avoid erroneous claims that the State Bar is lowering standards. “Reasonable standards don’t mean lower standards,” he said.

That's an almost Orwellian remark, given that what they're talking about is lowering the standards for passing the bar exam.

War is peace.
Freedom is slavery.
Ignorance is strength.
Failing is passing.

Wow! I hope the person who drafted these charts realize how much they support Richard Sander's mismatch theory. They don't say much about what the California bar cutoff score should be though.