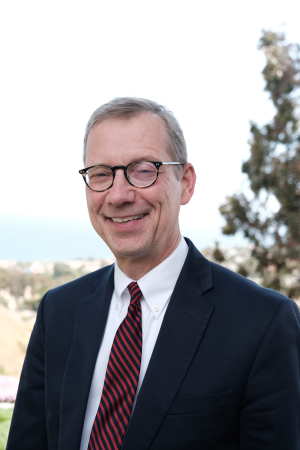 Paul Caron was named Duane and Kelly Roberts Dean of Pepperdine University School of Law on June 1, 2017. He explains his vision for Pepperdine and what drew him to the deanship at law.pepperdine.edu/about/dean.

Dean Caron joined the Pepperdine faculty in 2013 after serving as the D & L Straus Distinguished Visiting Professor in the spring semesters in 2010-2013. He served as Associate Dean for Research and Faculty Development at Pepperdine in 2015-2017). He previously was Associate Dean of Faculty and Charles Hartsock Professor of Law at the University of Cincinnati College of Law.

Dean Caron is one of the leading entrepreneurial tax scholars in the country. He has written over 50 books and law review articles, including most recently Federal Wealth Transfer Taxation (Foundation Press, 7th ed. 2015) (with Paul McDaniel & Jim Repetti); The One Hundredth Anniversary of the Federal Estate Tax: It's Time to Renew Our Vows, 57 B.C. L. Rev. 823 (2016); Tax Regulation, Transportation Innovation, and the Sharing Economy, 82 U. Chi. L. Rev. Dialogue 69 (2015) (with Jordan Barry); Thomas Piketty and Inequality: Legal Causes and Tax Solutions, 64 Emory L.J. Online 2073 (2015); and California Dreamin': Tax Scholarship in a Time of Fiscal Crisis, 48 U.C. Davis L. Rev. 405 (2014) (with Joseph Bankman). Dean Caron serves as Series Editor for two publishers in developing over 50 books for use by law students: the Law Stories Series of books published by Foundation Press; and the Graduate Tax Series of books published by LexisNexis for use in Tax LLM programs. He is the editor of three tax journals published by the Social Science Research Network (SSRN). In addition, Dean Caron is the Publisher and Editor of Tax Prof Blog, the most popular tax blog on the Internet; and the Owner and Publisher of the Law Professor Blogs Network of more than 50 blogs in other areas of law edited by law professors around the country. He was named the third most influential person in legal education by The National Jurist in 2015, and one of the 100 most influential people in tax and accounting every year since 2006 by Accounting Today. He has served as a visiting professor at the University of Florida College of Law, Florida State University College of Law, New York University/IRS Office of Chief Counsel Continuing Professional Education Program, and University of San Diego School of Law.