The intelligentsia of the Democratic Party is growing increasingly enthusiastic about raising the highest federal income tax rates to 70% or more. Former Labor Secretary Robert Reich took the lead in February, proposing on his blog "a 70% marginal tax rate on the rich." After all, he noted, "between the late 1940s and 1980 America's highest marginal rate averaged above 70%. Under Republican President Dwight Eisenhower it was 91%. Not until the 1980s did Ronald Reagan slash it to 28%." ...

This new fascination with tax rates of 70% or more is ostensibly intended to raise gobs of new revenue, so federal spending could supposedly remain well above 24% of GDP rather than be scaled back toward the 19% average of 1997-2007. ... 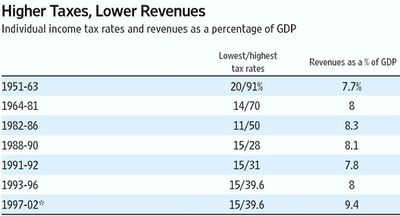 [P]undits cling to the myth that lower tax rates mean lower revenues. "... Yet the chart nearby clearly shows that reductions in U.S. marginal tax rates did not cause "falling tax revenue." ... Since the era of 70% tax rates, the U.S. income tax system has become far more "progressive." ... Despite these massive tax cuts for the bottom 80%, overall federal revenues were the same 18.5% share of GDP in 2007 as they were in 1979 and individual tax revenues were nearly the same—8.7% of GDP in 1979 versus 8.4% in 2007.

Listed below are links to weblogs that reference WSJ: Why 70% Income Tax Rates Won't Work:

» Besides the part about them being insane from Roth & Company, P.C.
"Why 70% rates won't work." Via the TaxProf. Related: More on Supply-Side Economics, by David Henderson: The real question is... [Read More]

» The Sweet Spot from what if?
Some of my conservative friends think that any sort of progressive tax system is wrong. I do not share their view. I do not have a problem with those who have enormous incomes paying a higher percentage of that income... [Read More]

Run government more like a business.
RAISE PRICES to the highest price that people will pay.

People keep complaining that the rich will leave. Well as I see it the rich are still moving to USA. Let's push the price up till we lose 1% of them. I am certain we can raise prices much more then 1% on those making more then 100k without losing them.

FYI the median household income level in the USA is 50K so those making 100K are making twice the median level.

I note that on the sidebar to this page there is an article by Bruce Bartlett saying that T-Paw is wrong, tax cuts don't pay for themselves. I sure wish someone would put these two seemingly opposing views in perspective.

It's worth noting that the Great Depression did not really end until 1947, when the US reduced its extortionate tax rates on the rich. That's when the US economy really began to bust loose.

Broadening? You mean the "broadening" that reduced the number of Americans who pay income taxes to about 50%?

But anyway, let the dems do it… it should put them into the wilderness for 20 years again.

Let's make taxation transparent and see how the public will react to government spending. Here's my suggestion for replacing all transfers of wealth (taxes and entitlements). Can someone tell me why it wouldn't work?

1. All persons residing in the U.S. shall come together in “tax units”. Members need not be related, need not reside together, and a tax unit may consist of as few as one person.
2. Each year congress shall set a "minimum wage" and a "tax rate".
3. The following shall not be subject to taxation:
• An amount equal to a year's earnings (2000 hours) at the minimum wage, for each adult (age 20-65), decreasing 10% per year to 50% at age 15, and increasing 10% per year to 150% at age 70.
• All payments for necessary health care including medical care, pharmaceuticals prescribed by a health care professional, vision and hearing aids, and fees for health-enhancing entities such as gyms. Health care insurance premiums may be deducted but not health care expense paid for by such insurance.
• All educational expenses including day care for children or legally incompetent persons, the portion of state and local taxes used for education, and tuition, fees and educational materials for private school education, including that portion of parochial school tuition and other expenses going for non-sectarian education.
• All income saved into an account for investments; withdrawals from this account for the benefit of any member of the tax unit shall be reported as income.
4. The "tax rate" shall be applied to any income greater than the deductions listed above, regardless of amount.
5. Any municipality having greater than 100,000 inhabitants or any state may impose on their citizens a surtax which shall be applied the same as the Federal tax.
6. Tax units whose deductions exceed income, shall be paid a sum equal to the tax rate multiplied by the shortfall in income.
7. There shall be no federal tax on corporations or other business entities.
8. The Office of Management and Budget shall compute revenues to be expected using the newly set tax rate and minimum wage, applied to the previous year's reported incomes. No expenses in excess of that amount may be made without approval by 75% of each house of Congress. This tax shall be the only source of revenue for the federal government.

"Oh yes, and under Clinton increasing the marginal rate resulted in higher revenues as a percent of GDP."

Meanwhile, under Clinton the rapidly expanding GDP and expanding personal incomes due to an exploding equities market led to higher revenues as a % of GDP. This happened DESPITE his administration and the Republican Congress working in sync to cut the Captial Gains tax. Doesn't that seem counter-intuitive according to the higher rate==higher revenue argument?

Question - wasn't there a number of tax deductions - interest on credit cards etc. which were eliminated with the Reagan tax rate cuts but were not re-instituted with Clinton's tax rate increase?

Lies, damned lies and statistics. That graph has to be the most biased representation of tax stats.
1. The first two timeframes includes the 1954 and 1969 tax code revisions, which changed revenues significantly and are a longer period of time and subject to more smoothing.
2. It also didn't take realization rates into effect for capital gains, which are more driven by bull and bear markets and recessions, which depress the percentage of receipts to GDP because of things like NOL's. Notably the timeframes are short and end include a significant period of time in a recession (1982 and 1990), which would skew the results considerably.

This guy should win a gold medal for intellectual dishonesty.

Its the spending not the taxation rate that is the problem. Higher rates have one good effect, they stimulate work for tax accountants and lawyers. It will be the small business owner or professional that would bear the brunt if the democrats have their way again, its not so easy converting ordinary income in to capital gains income.

We are doomed as a society if the proposals for near-balanced budgets are constantly on the taxing side, and not increasingly on the expenditure side.
More people might be comfortable with the government taking a slightly bigger slice out of their paycheck if they were sure that the money was being used for better government rather than an increased volume of Congressional crotch shots.

This all depends on one's definition of "working."

For politicians, a budget only needs to balance on paper at the time that it's passed. Even a 99% tax rate can do the job when the actual revenues aren't expected to come in until later.

How about taxing distributions from 50+ year old trust funds at 90%?

And taxing education endowment funds (with an exemption on the first billion of proceeds)?

And we prioritize spending so if revenue doesn't cover it, cuts are automatic?

Robert Reich was on Kudlow's show (6/16/11) and essentially admitted that his Democrat friends will be raising taxes on the middle class at the first opportunity. (But he didn't specify any income levels).
^^^^^^^^^^^^^
On a related matter, I’ve noticed that many on the political left like to point to IRS tax revenues as a % of GDP for the year 2008. They argue that this number (I don’t remember the number exactly) shows that we are “not overtaxed”. They never seem willing to concede that capital gains were annihilated that year.

We will take this seriously as soon as someone who is serious seriously proposes a 70% tax rate. Last time I looked Mr. Reich has not been in a govrnment position in years, and the last time I looked he was losing the Democratic nomination for Governor of Massachusetts.

The less revenue line could be explained by reasons other than the magnitude of the tax rates. For example, there were more loopholes back then and the IRS didn't enforce as well back then.

Whether creating additional marginal rates for wealthy taxpayers is a good idea or not, Mr. Reynolds seems to miss the critical factor accompanying those marginal rate decreases. It was the broadening of the tax base that brought both fairness and the additional revenue his chart tracks, not the supposed magical prosperity produced by rate cuts. Public discourse on tax reform functions at a despairingly low level.