U.S. Treasury Department: Disparities In The Benefits Of Tax Expenditures By Race And Ethnicity

This analysis, the subject of a new Office of Tax Analysis (OTA) working paper [Tax Expenditures by Race and Hispanic
Ethnicity: An Application of the U.S. Treasury Department's Race and Hispanic Ethnicity Imputation], finds disparities in the benefits of some tax expenditures among White, Black, and Hispanic families. Tax expenditures are provisions of federal law that allow a special exclusion, exemption, or deduction from gross income or which provide a special credit, a preferential rate of tax, or a deferral of tax liability for certain activities. Examples include the preferential rates for capital gains, the home mortgage interest deduction, and the Earned Income Tax Credit. OTA working papers are works in progress intended to generate discussion and critical comment.

Researchers frequently analyze the distributional effects of tax policies across an array of demographic information, including income, family structure, age, and geography. However, it is challenging to perform such analysis by race and ethnicity because there is no single data source with both tax and race/ethnicity information. Tax liability does not depend on race or ethnicity, and this information is not collected on tax returns.

To overcome this challenge, Treasury researchers have developed a method to impute race and ethnicity in tax data. Under this method, researchers estimate the probability that the primary filer—the person listed first on the tax return—is Asian, Black, Hispanic, Native American, White, or multiple race based on other information available in the tax data. These probabilities are then used as weights to construct estimates for different groups. ... 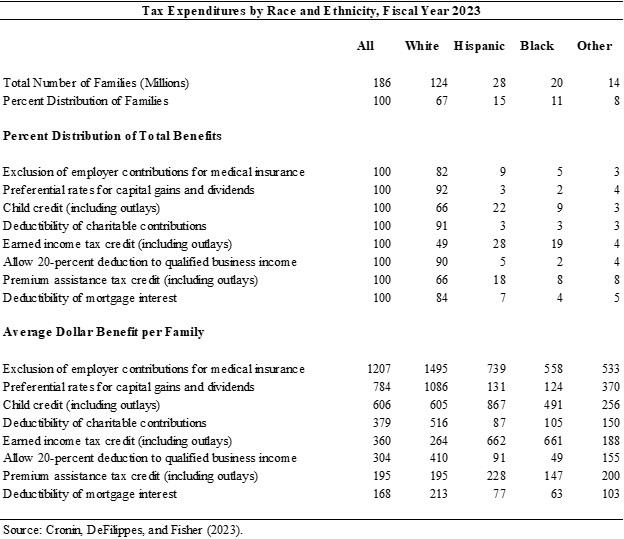 While many questions remain, these initial findings emphasize the scrutiny that should be paid to existing and proposed tax expenditures that take the form of deductions, exclusions, and preferential rates. On a per capita basis, these types of benefits typically benefit a disproportionately White population and thus expand racial disparities. In contrast, refundable credits more frequently reduce racial disparities and can often be better designed to achieve the underlying policy goals as well.

The US Treasury Department’s first-ever analysis of tax return data by race and ethnicity shows White Americans disproportionately benefiting from a variety of tax breaks, including those aimed at investors.

Non-Hispanic White Americans, who make up two-thirds of US families, receive 92% of the benefit from the lower tax rate on dividends and capital gains, and about the same share for deductions of charitable gifts and pass-through business income, according to the Treasury study, which looks at the impact of several major tax breaks. Some other provisions, like the earned income tax credit and child tax credit, are more evenly distributed. 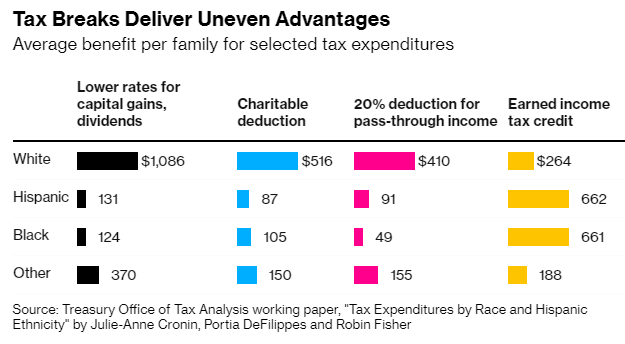