McCaffery Presents The Paradox Of Taxing The Rich Today At Florida 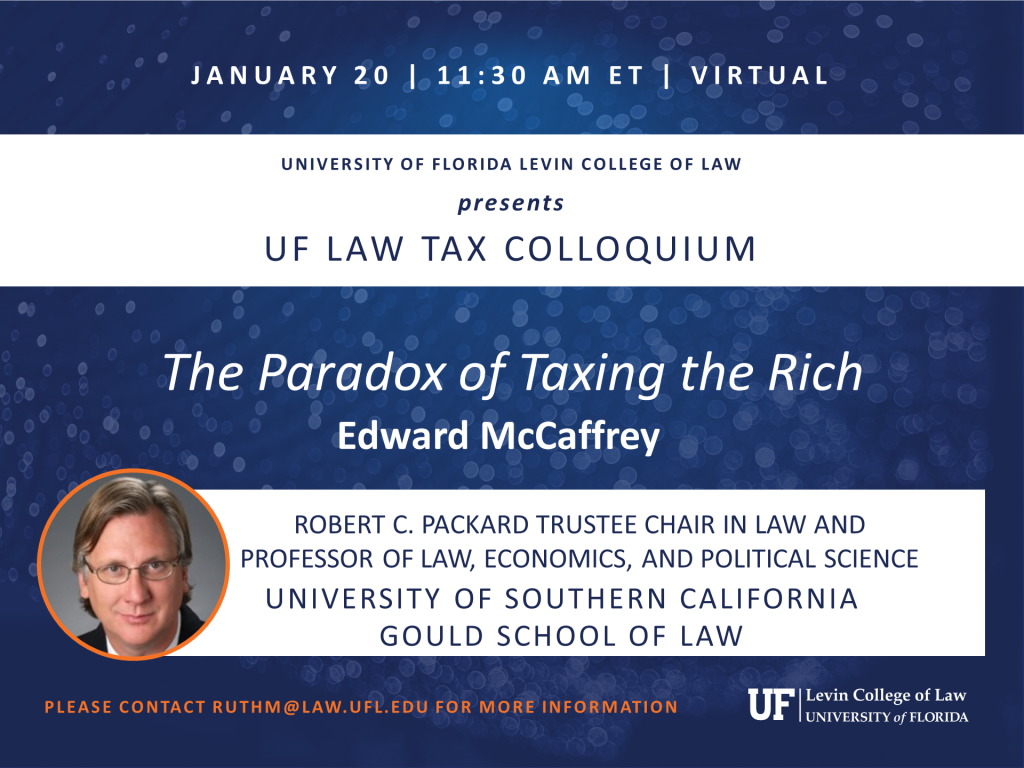 Edward McCaffery (USC; Google Scholar) presents The Paradox of Taxation the Rich at Florida today as part of its Tax Colloquium Series hosted by Charlene Luke:

In the Summer of 2021, stories broke across the mainstream American media that the wealthiest Americans, such as Jeff Bezos and Elon Musk, were paying no income taxes, perfectly legally, under the simple tax-planning advice to Buy, Borrow, Die. By the Fall, politicians were running out proposals to address the embarrassment, such as Senator Ron Wyden’s “Billionaire’s Tax.” Yet just a year later, in the Summer of 2022, as President Joe Biden and his fellow Democrats were trying to salvage some semblance of Biden’s once-ambitious “Build Back Better” agenda prior to the Congressional midterm elections, came word that little would be done to reverse course on recent and longstanding American tax policy: There would be only modest and largely symbolic tax increases on the rich, and no change at all to any of the planks of Buy, Borrow, Die.

And so the fundamental things continue to apply as time goes by. Contrary to the fears of our founders and indeed to the presumptions of common sense, the vast masses of ordinary Americans have never risen to meaningfully tax the wealthiest few of their fellow citizens. This leads to an obvious question: Why not?

A paradoxical answer is that we cannot afford to do so. Taxing the rich would cost resources that the American government has been unwilling to spend. This Article explains how this problematic paradox arises under current tax law and theory. It then turns to ways that society can move beyond the paradox by exploring and redefining the ends of redistribution – by rethinking, that is, the fundamental role of tax and redistribution in a well-functioning democratic society. The road forward will not be easy. But hope must spring eternal as the task of taxing the rich grows more urgent with each missed opportunity.