American Inheritance: Liberty And Slavery In The Birth Of A Nation

New York Times Book Review: Can the Country Come to Terms With Its Original Sin?, by Jon Meacham (Vanderbilt) (reviewing Edward J. Larson (Pepperdine)), American Inheritance: Liberty and Slavery in the Birth of a Nation, 1765-1795 (2023): 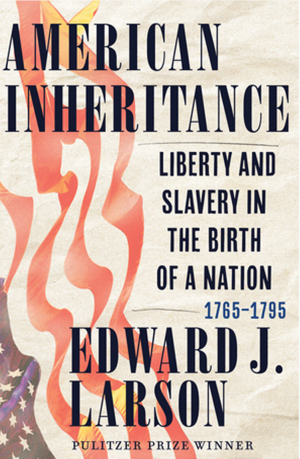 Our own age has been hard on both reason and history. Too often the past has been deployed to fight the ideological wars of the moment, a tendency that reduces history to ammunition. And so Edward J. Larson’s “American Inheritance” is a welcome addition to a public conversation, in the wake of The New York Times’s 1619 Project, that has largely produced more heat than light.

“The role of liberty and slavery in the American Revolution is a partisan minefield,” Larson writes. “Drawing on a popular narrative presenting the expansion of liberty as a driving force in American history, some on the right dismiss the role of slavery in the founding of the Republic. Appealing to a progressive narrative of economic self-interest, and racial and gender bias in American history, some on the left see the defense of state-sanctioned slavery as a cause of the Revolution and an effect of the Constitution.” Larson, a prolific historian whose “Summer for the Gods” won a Pulitzer Prize in 1998, writes that this polarity “has opened the way for rigorous historical scholarship” in the tradition of Edmund Morgan and Benjamin Quarles.

“American Inheritance,” then, comes to us as an effort to step into the blood-strewn chaos of the present to calm the madness of a public stage where passion has trumped reason. As Larson argues, liberty, slavery and racism — an essential element of slavery — have always been entwined. “One way or another,” he writes, “the American Revolution resulted in the first great emancipation of enslaved Blacks in the New World.”

Yet to deny that a liberty-seeking people largely denied freedom and equality to the enslaved is to deny a self-evident truth. Mindless celebration of the American past is just that — mindless. But so is reflexive condemnation. The messy, difficult, unavoidable truth of the American story is that it is fundamentally a human one. Imperfect, selfish, greedy, cruel — and sometimes noble. One might wish the nation’s story were simple. But that wish is in vain.

A key lesson from Larson’s narrative is that ages past were not benighted by a lack of knowledge of the immorality of race-based slavery. To me, Larson’s unemotional account of the Republic’s beginnings confirms a tragic truth: that influential white Americans knew — and understood — that slavery was wrong and liberty was precious, but chose not to act according to that knowledge and that understanding. ...

Mr. Larson, a Pepperdine University historian who won the Pulitzer Prize for a book on the 1925 Scopes trial, submits enough evidence in his newest work to indict almost all the Southern (and some Northern) Founders for, if nothing else, insensitivity to the human beings they held in chains while rebelling against the British for enslaving the American colonies.

One by one, not only the much-criticized Thomas Jefferson but also James Madison, Patrick Henry and even Benjamin Franklin stand accused of indifference, equivocation or dehumanizing racism as they articulate a vision of American freedom with slavery intact and later devise a constitutional government designed in part to protect the institution from federal interference.

Words mattered to men like Jefferson and Madison, but as Mr. Larson repeatedly demonstrates, the revolutionary generation promiscuously deployed the term “slavery” as “a metaphor for a lack of political liberty or agency” under British rule yet “saw little connection between freedom for themselves and slavery for Blacks.” The Boston minister Jonathan Mayhew, for example, justified revolution by insisting that even “our bought Negro slaves . . . thought it would be more ignominious and wretched to be the servants of servants, than of free-men.” And the antislavery John Adams shockingly expressed resistance to so-called British enslavement by vowing: “We won’t be their negroes.” ...

Mr. Larson is a calm but vigorous storyteller who melds sophisticated historical analysis with telling anecdotes to vivify a graceful narrative, distilling 30 years of history—and sophistry—into a swift, compelling form. While acknowledging that the study of liberty and slavery in the Revolutionary era remains a “partisan minefield,” Mr. Larson plunges in, sparing none of the era’s most prominent revolutionaries from scrutiny. Even the midnight rider Paul Revere stands accused of whitewashing his iconic engraving of the Boston Massacre by omitting—the word of the moment is “erasing”—its first casualty, the heroic black sailor Crispus Attucks, whose martyrdom would not be acknowledged until later.

Does the book unfairly apply present-day standards to mar the reputations of the Founders? Mr. Larson is scrupulously careful to acknowledge their considerable accomplishments—but does not shrink from exposing the gaping blind spot that even some of their contemporaries recognized. “Oh! Washington, what a name has he had,” Mr. Larson quotes one veteran of the Revolution lamenting, “but he holds those in slavery who have as good right to be free as he has.”

“Liberty and slavery remain our conflicted American inheritance,” Mr. Larson persuasively concludes. He has invited us to the belated, unflinching and painful reading of the will. How we deal with the legacy is up to us.