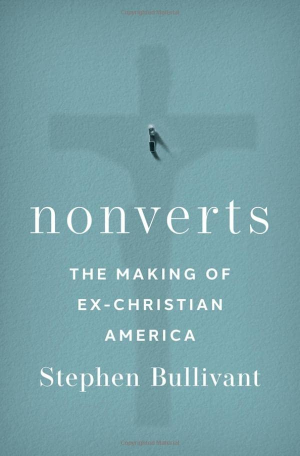 Last week I read a tweet that led me to a book I’m now devouring at record speed. The tweet was from my friend Skye Jethani, and it referred to a potential link between the end of the Cold War and the rise of America’s religious nones. I’ve been thinking about the continuing influence of the Cold War on American life for a very long time. Our nation spent generations defined by the struggle against Soviet communism, and that struggle (along with its rather abrupt end) was bound to have profound effects on our national life.

The book is called Nonverts: The Making of Ex-Christian America, by a British sociologist named Stephen Bullivant. It’s not just an important book, it’s the best-written and most readable work of religious sociology that I’ve read in a very long time.

At the risk of over-simplification, Bullivant’s book attempts to explain the ... remarkable rise of religious “nones” in the United States: 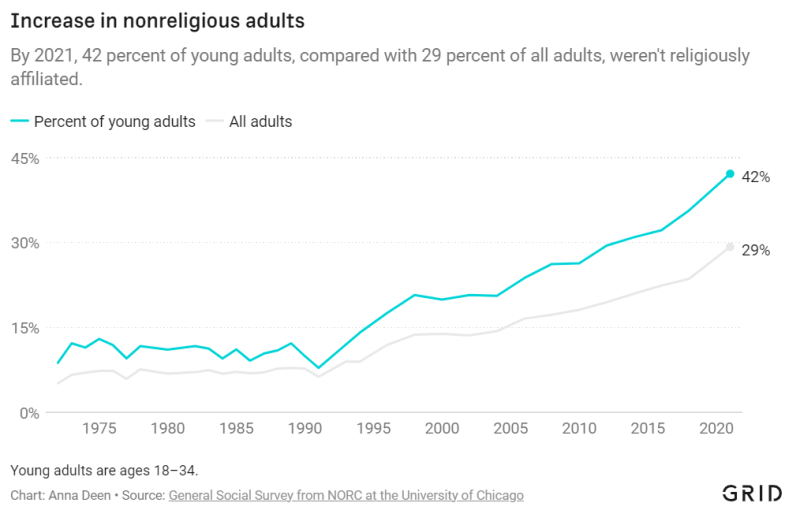 Source: Grid, A Mass Exodus From Christianity Is Underway in America. Here’s Why.

... In the chart above, a distinct data point stands out—the sharp rise of young “nones” begins in the early 1990s. Why? That’s when the Cold War ended, and Bullivant argues convincingly that the end of the Cold War marked the beginning of a new era of American religion.

Memory of the Cold War is fading from American life. ... It’s thus easy to forget that our nation’s struggle against atheistic Soviet communism defined our national purpose for almost 50 years. That struggle came hard on the heels of a cataclysmic world war fought against great powers animated by two non-Christian ideologies, Nazi fascism and Japanese imperialism.

Generations of Americans grew up against the backdrop of an existential struggle that was also inescapably religious—more so, Bullivant notes, in the U.S. than elsewhere. America was already more religious than its European allies, so Soviet atheism impacted our view of the conflict even more than it did elsewhere.

The national motto, “In God We Trust,” is a Cold War artifact, enacted in 1956 in part to distinguish the United States from the Soviet Union. The phrase “under God” was added to the Pledge of Allegiance in 1954, also for the purpose of distinguishing America from its communist foes.

There were many ways of capturing the distinctions between the United States and the Soviet Union, including phrasing it as freedom versus tyranny and communism versus capitalism, but the formulation of atheism versus faith resonated in tens of millions of American hearts. The association flowed the other way, too: Americans often (and often wrongly) sensed the stink of communism around atheism. The social pressures against public professions of unbelief were overpowering. ...

Given those long decades where faith mixed with capitalism and military power in an effort to defend against the Soviets, you can see why that mixture became imprinted in the American church, especially in its more conservative corners. It certainly became imprinted on me—when I was younger I resolved to take my turn in the military both because I wanted to defend the United States and because I wanted to block the expansion of an atheistic empire.

Then, suddenly, the Soviet threat was gone. ... “Very soon,” writes Bullivant, “the most pressing geopolitical threat to baseball, Mom, and apple pie was not from those without religion but those with rather too much of the wrong kind of it.” The 9/11 attacks introduced Americans to Islamic fundamentalism, and “religious extremism, in the form of radical Islamic terrorists, usurped the place in American nightmares that communist infiltrators used to occupy.”

Moreover our nation—quite rightly and quite intentionally—refused to turn the fight against Islamic terrorism into a religious war. To cast American interventions in the Middle East as part of a war between Christianity and Islam was to play directly into our enemies’ hands. Instead, our first motivation was simple self-defense. Our second motivation was based more in democracy and human rights than in faith or religion. ...

Do we wonder why younger Americans, including many younger American Christians, don’t see the world the same way? Then remember 9/11 and the 20-year military struggle that followed. In fact, as Bullivant argues, “the atrocities of 9/11 opened up the possibility for a full-throated presentation of Atheism-with-a-capital-A to gain a hearing (and vast book sales).” ...

But Bullivant’s bottom line is both provocative and important. If we want to understand why the American religious landscape has changed so much and so fast, don’t just look at our domestic cultural conflicts—look also to one of America’s greatest triumphs. Our victory in the Cold War transformed our nation’s faith.