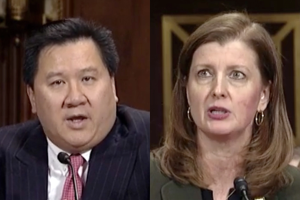 Judges James C. Ho and Elizabeth Branch, both prominent conservative appointees of former president Donald Trump, made headlines when they publicly announced they would no longer be hiring clerks from Yale Law School.

On Wednesday, the boycotting duo engaged in a discussion about free speech on college campuses moderated by law professor Akhil Reed Amar, whom Ho singled out as a personal friend at the beginning of his remarks.

“Cancel culture is a cancer on our culture,” Ho said in his opening statement to the room. “And we need to cure it before it’s too late.”

Branch also confirmed to the News that she and Ho would be attending a panel organized by Yale Law School administration at the beginning of next year. She went on to explain that the invitation to the panel made no reference to her and Ho’s boycott. ...

During the panel, Branch made reference to the possibility that Kristen Waggoner, a conservative American lawyer, would be returning to campus. Waggoner’s presence on a Federalist Society panel last year spurred protests due to her affiliation with a Southern Poverty Law classified hate group.

The Yale Law School press office declined to comment on whether or not Waggoner would be returning.