Inazu: The Respect For Marriage Act, Christianity, And Pluralism

Following up on last Sunday's post, David French: An Open Letter To Those Who Think I’ve Lost My Christian Faith Because I Support The Respect For Marriage Act:  John Inazu (Washington University; Google Scholar), Pluralism Isn't Just for Political Losers: 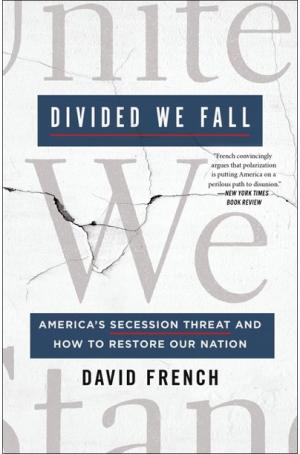 A debate between two Christian conservatives shows how shifting political tides can affect commitment to principles of toleration and difference ...

Last week, a debate about the limits of pluralism unfolded between Albert Mohler and David French. Mohler is the president of The Southern Baptist Theological Seminary in Louisville, Kentucky. French is an attorney and political commentator who writes for The Dispatch and The Atlantic [and the author of Divided We Fall: America's Secession Threat and How to Restore Our Nation (2020)] ...

The controversy began after Mohler critiqued French’s Atlantic essay supporting the Respect for Marriage Act. The proposed legislation would require the federal government to recognize the validity of same-sex and interracial marriages and also provide certain protections for the religious liberty of those who do not support same-sex marriage. ...

Mohler’s critique invoked a philosophical debate of whether pluralism is a normatively attractive—and for Christians, a theologically plausible—response to the fact of difference in our world. He expressed astonishment that French, as a Christian, would support the right of “gay couples to enjoy the legally protected right to build a life together.” Mohler elaborated:

The key issue seems to be French’s basic confidence in pluralism as the great civic goal and central political principle. But pluralism requires careful definition and boundaries. In a recent book, French explains, “I recognize pluralism as a permanent fact of American life and seek to foster a political culture that protects the autonomy and dignity of competing American ideological and religious communities.”

Mohler then offered his gloss on French’s quote:

But what, dare we ask, are the allowable boundaries of respectable pluralism? In answering this question, David French is particularly unclear. If he is clear, his view would undermine any stable public morality based on any objective moral truths.

French observes in a lengthy response that Mohler’s “big beef is with my commitment to pluralism.” He finds particularly implausible Mohler’s charge that pluralism “undermines any stable public morality based on any objective moral truths.” Turning to the context of Mohler’s critique, French writes:

This argument is occurring after hundreds of thousands of gay marriages have been performed, and I have yet to hear a compelling argument why the “stable public morality” [that Mohler advocates] requires Christians to support ripping legal recognition and stability from those families. ...

The politics are complicated, but politicians, lobbyists, and commentators generally fall into one of four camps when it comes to The Respect for Marriage Act and the legislative proposals that preceded it:

Mohler critiques French for being in Camp 2 and locates himself in Camp 4. ...

Real pluralism requires political compromise and living with those whose words and actions offend your sensibilities even when—especially when—the politics might favor your views. Pluralism can’t just be the last refuge of political losers—it requires give and take from all of us.