Hemel: House Democrats Can Release Trump’s Tax Returns. But Should They? 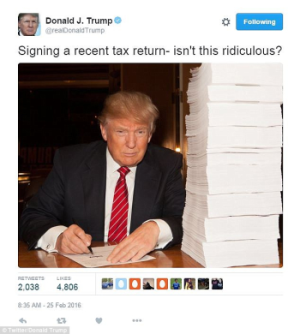 Now that a House committee has obtained access to six years of former President Trump’s tax returns, congressional Democrats face an easy question and a harder one.

The easy question is whether, as a matter of law, the House Ways and Means Committee—which gained access to the former president’s tax filings after the Supreme Court dismissed Trump’s last-ditch bid to block the Internal Revenue Service from handing over the documents—can make Trump’s returns public before Republicans take control of the chamber on Jan. 3. The answer to that question is straightforwardly yes.

The harder question is whether, as a normative matter, the committee ought to make Trump’s returns public in the waning weeks of the Democratic majority.

On the one hand, Trump’s tax filings should have seen the light of day long ago. Trump should have released his returns voluntarily—as every elected president since Richard Nixon has. The Trump administration should have allowed the IRS to hand the president’s tax returns over to the House Ways and Means Committee when that panel’s chair, Rep. Richard Neal (D-Mass.), requested those documents in April 2019. And the federal judiciary shouldn’t have allowed Trump to stall the release of his returns for three and a half years through litigation.

Fortunately, the Senate Finance Committee—which will remain under Democratic leadership in the next Congress—has both the resources and the apparent inclination to conduct the comprehensive review of the presidential audit program that House Democrats initially set out to undertake. So even if the House Ways and Means Committee doesn’t release Trump’s tax returns this month, the likely consequence is not that Trump’s returns will remain under wraps forever. The Senate Finance Committee will be able to obtain the returns itself, and that committee then can release return information that is relevant to its review of the presidential audit program. ...

[I]t’s important that Democrats on the House Ways and Means Committee remain true to their word. Chairman Neal said his committee needed Trump’s tax returns to evaluate the extent to which the IRS audits and enforces federal tax laws against the president. To turn around now and release Trump’s returns—outside the context of a thorough evaluation of the IRS’s presidential audit program—would make the stated rationale look much like a head fake. That would seem especially gratuitous given that the Senate Finance Committee stands ready, willing, and able to carry out its own review of the presidential audit program.

Vox, What Congress Can Do With Trump’s Tax Returns