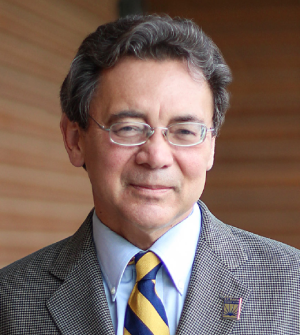 Kevin R. Johnson, Dean and Mabie-Apallas Professor of Public Interest Law and Chicana/o Studies at University of California, Davis School of Law, is the inaugural recipient of the Michael A. Olivas Award for Outstanding Leadership in Diversity and Mentoring in the Legal Academy, a joint recognition by five sections of the Association of American Law Schools (AALS).

“I am incredibly honored to receive this award,” Johnson said. “I am especially touched because Michael was a friend, colleague, and an important mentor to me. He was a brilliant, prophetic scholar, and a risk-taking and pathbreaking advocate for underrepresented groups in the legal academy, and the world. I am extremely grateful to be the first recipient of the Michael A. Olivas Award.”

The annual award serves as a memorial to Michael A. Olivas, who died in April 2022 after an illustrious career in law, most recently as William B. Bates Distinguished Chair in Law Emeritus at the University of Houston Law Center and the Director of the University of Houston’s Institute for Higher Education Law & Governance. In 2018, Olivas was awarded the AALS Triennial Award for Lifetime Service to Legal Education and the Law, the association’s highest honor.

The Olivas Award is presented by the AALS Sections on Civil Rights, Education Law, Immigration Law, Minority Groups, and Student Services. It is awarded annually to the faculty member who most vividly exemplifies Olivas’s devotion to mentoring junior and aspiring faculty from underrepresented communities and promoting diversity, inclusion, and equity in the legal academy.

Johnson has led UC Davis School of Law since 2008. During his time as dean, the school has drawn national accolades for its majority-minority faculty and overall emphasis on diversity, equity, and inclusion. In 2020, Johnson introduced a Racial Justice Speaker Series that draws leading scholars from throughout the country.

“For decades, Dean Kevin Johnson has exemplified Michael Olivas’s dedication to uplifting the next generation of diverse leaders in legal education.” said Anthony Varona, chair of the Olivas Award Selection Committee and Dean and Professor of Law at the University of Seattle School of Law. “The Selection Committee received many compelling nominations in support of an array of legal education leaders who very effectively carry on much of Michael’s legacy. We hope that many of these deserving nominees will be celebrated with the Olivas Award in future years. But this year, the award’s inaugural year, the Selection Committee was unanimous in our agreement with his many nominators that there is no one more deserving of the first Olivas Award than Dean Kevin Johnson. I know that Michael himself would have cheered this selection.”

The award will be presented in-person at an awards ceremony at the AALS Annual Meeting in San Diego, California on January 5, 2023.