Inside Higher Ed, Professors Will Stay On Twitter After Elon Musk's Purchase—At Least For Now: 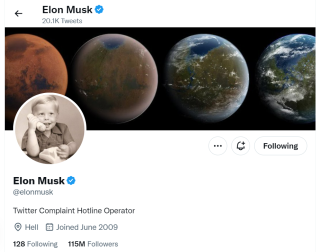 Elon Musk took control of Twitter on Oct. 27, prompting many academics who tweet to ask whether the moment calls for choosing a different social media platform. The billionaire owner and self-described “free-speech absolutist” has, among other controversies, floated the idea of reversing the ban on former president Donald Trump. That has left many in academe concerned that toxic content and disinformation about social, medical and political issues could accelerate in the Twitterverse.

“Anything Twitter does which makes it a space where people are more likely to experience hate speech or threats of violence will erode its status as an essential gathering place” for higher ed, said Tanya Golash-Boza, a professor of sociology at the University of California, Merced, who has 15,800 followers. “I have long considered leaving Twitter—mostly because I go back and forth with regard to whether or not spending time on Twitter is fruitful or enjoyable.”

Few think that the 16-year-old Twitter will remain the same in the wake of recent changes. Many have already fled, and the platform’s political center of gravity has recently shifted right, according to an investigation by The Economist.

AcademicTwitter community members are now weighing the nontrivial opportunity costs of leaving. They are also making plans in case an ongoing affiliation with the company feels intolerable. But few are fleeing the digital gathering space in which they have invested so much—at least not yet. ...

The prospect of migrating an online community is a collective action problem. Few want to be the first to leave, as others may not follow. But when many wait to see what others do, a potential mass migration may not succeed. ...

All the academics with deep roots in academic Twitter that Inside Higher Ed contacted exhibited varying levels of concern about recent changes on the social media platform. But none have left—yet. For many, this wait-and-see approach means maintaining a Twitter account while also joining another platform with potential to replace it.