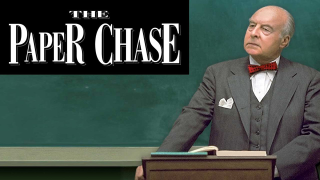 John Jay Osborn Jr., who while attending Harvard Law School wrote “The Paper Chase,” a 1971 novel following the tense relationship between an earnest student and his imperious contract law professor that was made into a feature film and then a television series, died on Oct. 19 at his home in San Francisco. He was 77. ...

“The Paper Chase,” Mr. Osborn’s best-known book, tells the story of two antagonists: Kingsfield, an austere, curmudgeonly Harvard elder, and Hart, an industrious first-year student from the Midwest who is trying to survive the cutthroat intellectual world of an elite law school. ...

Although Mr. Osborn said that Kingsfield was a composite of several of his law professors, Martha Minow, a former dean of the law school, said in an email, “I do know that some now long-gone law professors here vied over who was the real model for Kingsfield.”

When “The Paper Chase” was made into a film in 1973, Kingsfield was played by John Houseman, who was a longtime theater, film and television producer and a former colleague of Orson Welles’s but had only occasionally acted, and Hart was portrayed by Timothy Bottoms. Mr. Houseman won the Academy Award for best supporting actor.

In the movie, which was written and directed by James Bridges, Kingsfield famously tells his class: “You teach yourself the law but I train your mind. You come in here with a skull full of mush. You leave thinking like a lawyer.”

Mr. Houseman reprised his role in the series that ran, first on CBS and later on Showtime, between 1978 and 1986. James Stephens took on the role of Hart.

“The Paper Chase” was a reflection of Mr. Osborn’s experiences at Harvard Law amid an era of fervent student protests over the Vietnam War.

The school “did not have the flexibility to allow individuals to express themselves,” he wrote in the Harvard Law Bulletin in 2003. “It did not allow for reciprocity between faculty and students. In short, it really had no desire to be loved, or even to be respected.” ...

For the rest of his career, Mr. Osborn would balance writing novels, as well as television and film scripts, with teaching law — even, like Kingsfield, contract law. ...

After Harvard Law, Mr. Osborn clerked in Wilkes-Barre, Pa., for Judge Max Rosenn of the United States Court of Appeals for the Third Circuit. He then worked for about a year as an associate at the white-shoe law firm Patterson, Belknap, Webb & Tyler in Manhattan.

He left for postgraduate work at Yale Law School, then taught law, first at the Benjamin N. Cardozo School of Law at Yeshiva University and then at the University of Miami School of Law. At about the same time, he was writing novels: “The Only Thing I’ve Done Wrong” (1977), a family drama, and “The Associates” (1979), about life at a Wall Street law firm.

A sitcom based on “The Associates,” starring Martin Short, Alley Mills and Wilfrid Hyde-White, made its debut in 1979. But it lasted only 13 episodes. ...

His approach to teaching contract law was quite different from Kingsfield’s. The balance of power, he wrote, rested with the students, not the professor. He said that in his first class of each semester, he stood at the lectern until the students were totally silent.

“I explain to them that I’m not going to call on anyone,” he wrote in 2011. “They will have to volunteer to talk. Why am I not going to just call on students? I am not clairvoyant like their other professors. I have no idea which students have something to contribute to the discussion. Therefore I’m going to have to rely on them to tell when they have something to say.”