For many years my academic colleagues have tolerated the rankings while acknowledging their profound methodological flaws and describing their insidious effects. There is a mountainous record of critical commentary and analysis on the subject. Less substantively and perhaps too bluntly, I once said that "the rankings may be good for lining a parakeet cage, but as a roadmap for students they're not useful." 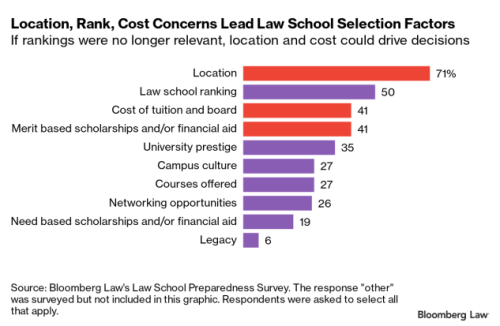 Chronicle of Higher Education, Can We Finally Topple The Tyranny of Rankings?:

Now that prestigious law schools, starting with Yale and Harvard and followed by Stanford, Columbia, Georgetown, Berkeley and UCLA, are withdrawing from the rankings published annually by U.S. News & World Report, has the time come to deal a fatal blow to the insidious power of the rankings? Or is this all too little, too late? The presidents and deans at these institutions have known, for decades, the plain truth: that the methodology of the rankings “can create perverse incentives that influence schools’ decisions,” as Harvard Law School’s dean put it, in ways distinctly harmful. ...

The law-school rebellion against rankings has to become national and comprehensive. If learning is to flourish, the public must understand why rankings are meaningless and destructive. We need to defeat the rankings and banish the mediocrity and uniformity they brought with them.

The recent announcement by the law schools at Yale and Harvard that they would “no longer participate” in the rankings offered up annually by U.S. News and World Report is, I suppose, worthy of at least polite applause. Berkeley Law followed soon after, then Columbia, Georgetown, and Stanford. As of today, [12] of the publication’s top 15 law schools have said they will stop taking part. Apparently crises of conscience are contagious. U.S. News rankings could charitably be called ridiculous and less charitably, pernicious, so any step to loosen their hold on the marketplace should be considered a good thing.

Outright celebration, however, should be put on hold by the recognition that these announcements will essentially change nothing, despite their ability to garner headlines in The New York Times, The Washington Post, CNN, and pretty much everywhere else. While perhaps not wholly insignificant, they are not actions of great consequence. Yale, Harvard, Berkeley, and the rest will pay no financial or reputational price for their principled refusal to cooperate: Applicants will still flock to these schools and law firms will still seek out their graduates. Their alumni will still be selected for a disproportionate share of prestigious clerkships. They will continue to be seen as the best. ...

The ire directed at U.S. News and other purveyors of rankings is understandable but can mask a deeper and more troubling reality: In the world of colleges and universities, reputation, brand strength, prestige — call it what you will — is now and has long been more important than anything else, including the nature and quality of the actual education provided. In fact it would be difficult to find another industry in which reputations are so fixed, so valuable, and based on so little hard evidence. U.S. News did not create either the prestige or the priorities of Yale and Harvard — or Williams or Amherst — and its demise would do little to alter those things. It has for 40 years confirmed what consumers thought they already knew.

Unless there is a snowballing of boycott announcements this week, I suspect that the net effect on USNews.com's mischief will be minimal.

“I have a strong suspicion that the factors behind it, and especially the curious timing of these decisions, is driven by preparation for the Supreme Court striking down affirmative action, as I believe the Supreme Court should do, and is likely to do as well,” Ramaswamy told Fox News Digital. ...

I think the calculus that some of them are making is to say that, ‘OK, if we can de-emphasize not only U.S. News & World Report rankings, but de-emphasize quantitative attributes for admission more generally, then at least we can achieve diversity by leaving it to randomness, leaving it to chance,” Ramaswamy said. “To say that, ‘We can’t look at test scores, we can’t look at GPAs in the same way, and we’re not as quantitatively inclined towards meritocratic criteria, then we’re more likely to get a random dispersion, and a random dispersion is at least going to be slightly more visually diverse than a non-random one that’s actually tethered to test scores.’”

The Wall Street Journal editorial board came to similar conclusions.