FiveThirtyEight: How Much Power Do Christians Really Have In The U.S.?

FiveThirtyEight, How Much Power Do Christians Really Have?:

There’s a sense ... that the country is in the midst of a reckoning over what it means to be Christian in America. On one side, there are the people who see Christians as the victims of a successful campaign to infuse the country with secular values, forcing Christians — particularly conservative ones — to accept values they violently disagree with. But many Americans think Christians occupy a very different role. In their version of the country’s current drama, Christians are the villains, ensconcing their own beliefs in law and politics even as their numbers dwindle. There’s a thread of unease on both sides — as if the one thing everyone agrees on is that these two ways of thinking about Christianity in America simply can’t coexist.

A FiveThirtyEight/PerryUndem/YouGov survey of likely voters shows just how deep this fissure runs. In this second installment of our exploration of invisible divides — the differences in worldview that shape how people vote and think about their place in America — we found profound disagreements about how much power Christians really have, and the role they should play in the country’s politics and culture. Like the other divides we’re exploring, these divisions track fairly neatly along partisan lines and help explain why the gap between Republicans and Democrats sometimes feels unbridgeable: It’s because their ways of thinking about the world are increasingly irreconcilable.

Are Christians victims? It depends on who you ask. Nearly half (46 percent) of survey respondents told us that discrimination against Christians is a problem in American society today, while a majority (54 percent) think it’s not. They were also divided along similar lines about whether far-right Christians are trying to impose their beliefs on other people: A majority (56 percent) agreed they are, while another 33 percent disagreed, and 10 percent weren’t sure. The political fissures on this question are as wide as religious divides, like church attendance, and sometimes wider — signaling that anxiety about what it means to be Christian may be shaped as much by people’s political allegiances as their religious ties. 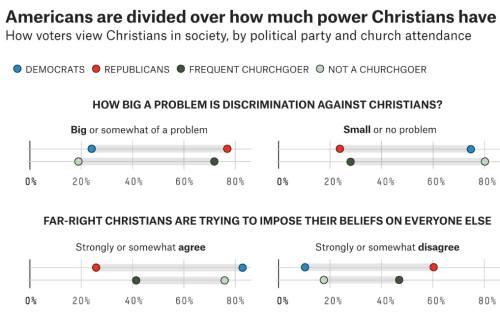 A minority of Americans support views that could be described as Christian nationalist, an ideology defined by social scientists as the belief that the U.S. is a Christian nation, and should be returned to its Christian foundations — by force, if necessary. According to our survey, only 27 percent of respondents agreed that the “government should favor Christianity over other religions,” and even fewer (22 percent) said that “God has called on conservative Christians to take control of our politics and culture.” Only 13 percent said that “the federal government should advocate for Christian religious values," and 19 percent said that “the federal government should stop enforcing separation of church and state.”