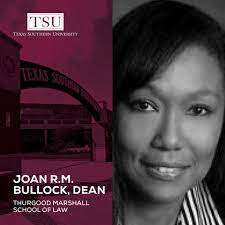 Texas Southern University’s law school dean was fired this summer after a series of missteps that caused the faculty to cast a vote of no confidence, according to lawyers from the Texas Attorney General's Office.

Officials at the Historically Black University were tight-lipped about Joan R.M. Bullock’s dismissal in June, but recently filed court documents cast light on the turmoil within the Thurgood Marshall School of Law. Bullock is suing the university, its regents and other leaders, alleging that she was stripped of her position and tenure without cause.

The attorney general's office, which is representing the public university, outlined in a federal court filing some of the reasons for why they said the former dean was fired. They also argued a motion for the case’s dismissal Wednesday and denied that Bullock was ever granted tenure—a highly protected status that provides educators job security and safeguards the freedom to teach and conduct research as they choose. ...

Not only had student performance on the Texas Bar Exam declined during Bullock’s two years as dean, but students had also “revolted” against her leadership to the extent that the university’s president and interim provost had meetings with student body leaders to address their concerns about her, according to the Attorney General's Office. ...

Bullock's lawsuit in September also revealed some of the problems that she said she faced, and she described an uphill battle at a struggling college. During her deanship, Bullock said, she was “repeatedly prevented” from advertising and hiring personnel as stipulated in the law school budget.

She also said she believes she was discriminated against because of her gender and that the timing of her firing points to First Amendment retaliation because she had just raised issues related to accreditation.