CBO Data: After-Tax, After-Transfer Income Inequality Has Been Flat Since 2000

CBO has just published The Distribution of Household Income, 2019 (November 2022). ... A good chunk of the underlying data behind this report is from income tax data. This data has the great advantage that is isn’t from a survey asking people about their incomes, but is from what people actually filed with the Internal Revenue Service, with in turn is cross-checked with data from employers, financial institutions, and other types of income (like royalty payments). ...

The real strength of the report is not that it is up to the minute, but rather that it offers a snapshot in time along with useful sense of trends in income inequality since the late 1970s, when it began to rise. Here are a few of the graphs that caught my eye. ...

Here’s the trend in average federal taxes paid at the top of the income distribution in the last 40 years or so. You will notice that while the subject has been the source of considerable political controversy, the ups and downs have pretty much levelled out over time. 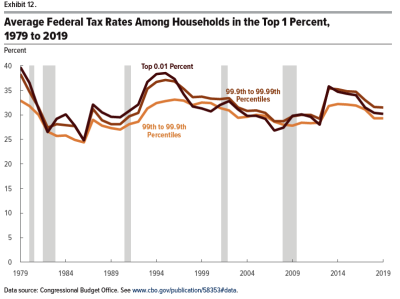 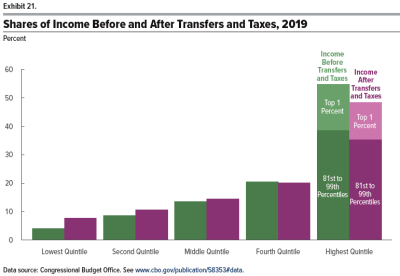 The Gini coefficient is a standard way of compressing the distribution of income into a single number. The Gini ranges from 0 to 1, where a Gini of 0 would imply a completely equal distribution of income, and a Gini of 1 would imply that a single person received all the income. Here’s the Gini for the US income distribution over time. You’ll notice that the top line, income inequality based on market incomes, is rising over time. However, the bottom line, which is income inequality after taxes and transfers, shows a Gini that has been essentially flat since 2000. The Gini in 2019 is higher than most of the 1970s and 1980s, but it’s similar in 2019 to the peak years over those periods, like 1986. 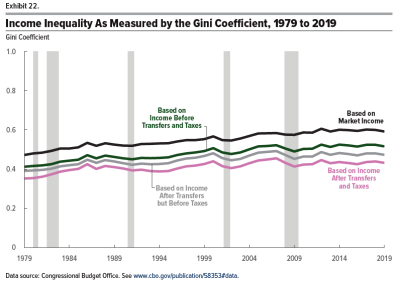 The overall pattern is that as market income has become more unequal, the forces of taxation and redistribution in pushing toward greater equality of after-tax, after-transfer income have become stronger over time, and since about 2000 those forces have broadly balanced each other out. Of course, nothing in these numbers is an argument that the US should not do more (or less) to redistribute. But the factual claim that after-tax, after-transfer income inequality has been rising substantially over time is often overstated—and is not true for the last two decades.