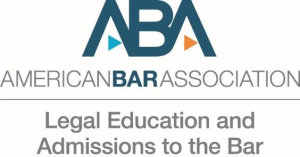 Today, the Council of the ABA Section of Legal Education and Admissions to the Bar approved a change in ABA standards affecting the language of requiring law schools to have a ‘valid and reliable’ test. The council amended the recommendation of its Strategic Review Committee and proposed a revised standard to eliminate the requirement for each applicant for the 2025-26 admissions cycle for the 2026-27 entering class. The proposed revision now goes to the ABA House of Delegates (HOD). Under ABA rules and procedures, the HOD, as the policy-making body is known, has a maximum of two opportunities to review a proposed change; it can concur, reject or return with recommendations. But final approval to change ABA Standards and Rules of Procedure for Approval of Law Schools rests with the council, which serves as an independent arm of the ABA for the accreditation of the nation’s law schools. The next HOD meeting is in February 2023 in New Orleans.

An American Bar Association panel voted Friday to drop a requirement that law school applicants take the LSAT or another standardized admissions test, amid debate about whether the tests help or hurt diversity in admissions.

The accrediting council, made up of lawyers, professors and administrators, voted 15-1 at its meeting to eliminate the requirement of a “valid and reliable admission test” for hopeful law students. ...

Individual law schools are still free to require a test. The policy change will take effect beginning for students applying in fall 2025. ...

The test-optional policy will be presented before the ABA’s House of Delegates in February, but final approval rests with the accrediting panel that voted for it on Friday.

In September, 60 law school deans mounted a defense of the standard. They argued that relaxing it would not necessarily even the playing field for underrepresented students. In their letter, the deans feared that the changes would be “premature and could have effects contrary to what is desired.”

“Specifically, we fear that an unintended consequence of removing Standard 503’s requirement that JD applicants take a valid and reliable admissions test will be to diminish the diversity of law schools’ incoming classes, by increasing reliance on grade-point average and other criteria that are potentially more infused with bias,” the letter states.

David Klieger, director of legal education at ETS, a nonprofit educational testing and assessment organization, echoed those concerns at the council meeting.

“While the future cannot be known with absolute certainty, if the proposal is approved, there is a significant risk that competitive stresses will pressure law schools to consider lowering admission standards,” Klieger said. “The stakes here are great. Law school is unlike so many other areas of higher education, and getting this wrong is enormously consequential.”

But council member Craig M. Boise, the dean of the Syracuse University College of Law in New York, noted that the percentage of Black students in law schools had “barely budged” over the decades. He argued that the gains that have been made could not be attributed to the requirement to take an LSAT.

“I find the argument that a standardized test is necessary to save diversity and legal education to be frankly bizarre,” Boise said. “There’s innumerable studies that establish that any standardized test, even without the intent of doing so, does discriminate because it reflects systemic inequities in our education system across the country, and that is invariably most disadvantageous to Black test-takers.”