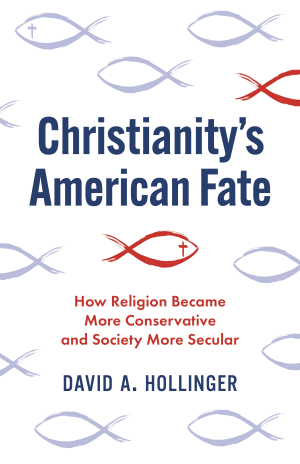 Whatever happened to fundamentalism? When Billy Graham and Jerry Falwell Sr. were alive, people knew that the former, a poster boy for evangelicalism, was winsome, and the latter, a fundamentalist TV preacher and head of the Moral Majority, was not. That was also a time when journalists classified Islamic terrorists as fundamentalists. Now “evangelical” carries most of the baggage fundamentalists packed. In elite academic and media circles, white evangelicalism is often associated with Christian nationalism, white supremacy, misogyny and distrust of science.

In “Christianity’s American Fate,” David A. Hollinger, a distinguished historian at the University of California, Berkeley (now retired), equates these terms. He begins by claiming, correctly, that fundamentalism was parent to evangelicalism. He leaves out that evangelicals tried to correct for fundamentalist cussedness with a kinder, gentler version of conservative Protestantism. Mr. Hollinger cannot accept that rebranding because 81% of white evangelicals voted for Donald Trump in 2016. For that reason, evangelicals threaten the intellectual and cultural norms of the mainstream. It’s debatable whether evangelicalism, interpreted carefully for 40 years by reputable scholars, deserves to be lumped in with bigoted Protestantism. In any case, Mr. Hollinger adds another to the pile of recent books that interpret support for Mr. Trump as evidence of evangelical toxicity.

This is surprisingly wooden analysis from a historian with an impressive record of explaining America’s intellectual elites. Mr. Hollinger does channel some of his expertise. Rather than merely enumerating evangelical flaws, he offers an alternative. Jewish Americans and ecumenical Protestants accommodated diversity, followed the science and advanced equality through social reform. In contrast, evangelicals have not risen to “the challenges of an ethnoracially diverse society and a scientifically informed culture.” ...

The temptation for some readers will be to compare “Christianity’s American Fate” to President Biden’s speech in Philadelphia in which he remarked that MAGA Republicans imperil “the soul of the nation.” Blue-state or red-state partisans will cheer or recoil from the book’s argument according to the way they heard the president’s speech. Presumably, Mr. Hollinger meant to avoid the caricatures that speech writers sometimes use, but his analysis is as tendentiously partisan as the faith and politics he fears.