The Supreme Court Is Blowing Up Law School, Too: Inside The Growing Furor Among Professors Who Have Had Enough

Slate, The Supreme Court Is Blowing Up Law School, Too: Inside the Growing Furor Among Professors Who Have Had Enough: 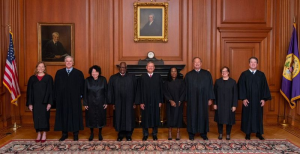 Khiara Bridges remembers the exact moment she lost faith in the Supreme Court. At first, at the start of Donald Trump’s presidency, Bridges—a professor who now teaches at UC–Berkeley School of Law—held out hope that the court might be “this great protector of individual civil liberties right when we desperately needed it to be.” Then came 2018. That June, the justices issued Trump v. Hawaii, which upheld the president’s entry ban for citizens of eight countries, six of them Muslim-majority. Suddenly, Bridges told me, she realized, “The court is not going to save us. It is going to let Trump do whatever he wants to do. And it’s going to help him get away with it.”

Four years later, the justices completely shattered whatever remaining optimism Bridges could muster about the court by overruling Roe v. Wade in Dobbs v. Jackson Women’s Health Organization. When the decision came down on June 24, she got a migraine for the first time in a decade. The image of the court as a majestic guardian of liberty was, she concluded, “a complete lie.” And it wasn’t just about her own personal feelings, either: Now she had to teach her students about the work of an institution that made her sick to contemplate.

Bridges is not alone. At law schools across the country, thousands of professors of constitutional law are currently facing a court that, in their view, has let the mask of neutrality fall off completely. Six conservative justices are steering the court head-on into the most controversial debates of the day and consistently siding with the Republican Party. Increasingly, the conservative majority does not even bother to provide any reasoning for its decisions, exploiting the shadow docket to overhaul the law without a word of explanation. The crisis reached its zenith between September 2021 and June 2022, when the Supreme Court let Texas impose its vigilante abortion ban through the shadow docket, then abolished a 50-year-old right to bodily autonomy by overruling Roe v. Wade. Now law professors are faced with a quandary: How—and why—should you teach law to students while the Supreme Court openly changes the meaning of the Constitution to align with the GOP?

A version of this question has long dogged the profession, which has fought over the distinction between law and politics for about as long as it has existed. For decades, however, the court has handed enough victories to both sides of the political spectrum that it has avoided a full-on academic revolt against its legitimacy. That dynamic changed when Trump appointed Justices Brett Kavanaugh and Amy Coney Barrett to replace far less conservative predecessors and created a Republican-appointed supermajority, a coalition further aided by the appointment of Neil Gorsuch to a seat that should have been filled by Barack Obama. The cascade of far-right rulings in 2022 confirmed that the new court is eager to shred long-held precedents it deems too liberal as quickly as possible. The pace and scale of this revolution is requiring law professors to adapt on several levels—intellectually, pedagogically, and emotionally. ...

The problem, it’s worth emphasizing, is not that the Supreme Court is issuing decisions with which left-leaning professors disagree. It’s that the court seems to be reaching many of these conclusions in defiance of centuries of standards, rejecting precedent and moderation in favor of aggressive, partisan-tinged motivated reasoning. Plenty of progressive professors have long viewed the court with skepticism, and many professors, right- and left-leaning, have criticized the reasoning behind certain opinions for decades. But it’s only in recent years—with the manipulation of the justice selection process combined with clear, results-oriented cynicism in decisions—that the problem has seemed so acute that they feel it affects their ability to teach constitutional law.

“It’s hard to think about your own profession—the things you were taught, the things you believed in—abruptly coming to an end in rapid succession,” said Tiffany Jeffers, a professor at Georgetown University Law Center. “It’s hard to ask a law professor to dismantle all the training they had. It’s a difficult, emotional, psychological transformation process. It’s not easy to upend your life’s work and not trust the Supreme Court.” ...

If left-leaning law professors do not quit en masse or embrace torpid nihilism, it will be because their students give them a reason to keep returning to the classroom. For those reaching the end of their career, though, the idea of rejiggering established syllabuses to teach the work product of this court may be too much to bear. My father, Nat Stern, retired from a 41-year career at Florida State University College of Law in May. He loved his job, and his students voted him “professor of the year” so many times that he stopped counting. I was surprised when he announced that he would step down from teaching at 67, a relatively young age within the academy. When I asked him why he decided to retire, he told me that he had no desire to explain the Supreme Court’s conservative revolution as the product of law and reason rather than politics and power.

“For the bulk of my career,” he said, “I’ve felt I could fairly explain rulings and opinions that I don’t endorse because they rested on coherent and plausible—if to me unconvincing—grounds. In recent years, though, I’ve increasingly struggled to present new holdings as the product of dispassionate legal reasoning rather than personal agendas.” I used to think my dad would keep teaching forever. I’m sure his students did, too. And maybe he would, in a different world, one where Republicans did not ruthlessly manipulate the court’s membership to achieve their policy goals. In this world, though, faced with a conservative supermajority on the Supreme Court for years to come, retirement was not a tough call.

“I’ve immensely enjoyed my career as an instructor of constitutional law,” he told me, reflecting on four decades of joy in the classroom. “But the direction of the court gives me no incentive to extend it.”

Law professors who remain years away from retirement do not have this escape hatch. They are already back in the classroom, bracing for another brutal term of precedent-smashing rulings. It’s not all bad: The students give them hope, keeping them “afloat in darker moments,” as Mayeri put it. Students have clued in to what’s going on, yet they persist in their legal education because they believe there’s still a real chance for change. There’s inspiration in that.