Seniors Are Moving From High-Tax States To Low-Tax States

Americans are moving from high‐​tax states to low‐​tax states. The smart states know this and are cutting income tax rates, as discussed in the forthcoming Fiscal Policy Report Card on America’s Governors.

One group that states want to attract with tax cuts are seniors and retirees. Just this year, 10 states cut their taxes on retirement income, which means income from Social Security, defined‐​benefit (DB) plans, and defined contribution (DC) plans, such as 401(k)s. Currently, about three‐​quarters of the states fully exempt Social Security benefits from taxes. About a dozen states fully exempt DB and DC benefits from taxes, and about half the states partly exempt it. ...

Seniors are moving from high‐​tax to low‐​tax states, as shown in the chart. On the horizontal axis is the sum of state and local sales, property, and individual income taxes as a percentage of income in 2019. On the vertical axis is the ratio of in‐​migration to out‐​migration for households age 65 and older, based on IRS data for 2020. The ratio is above one for states enjoying net in‐​migration and below one for states suffering net out‐​migration. Each state is a dot. 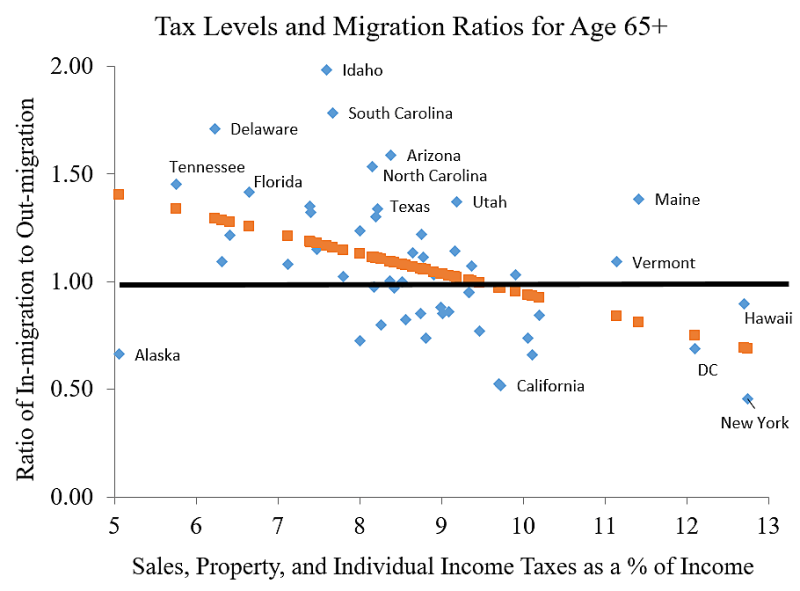