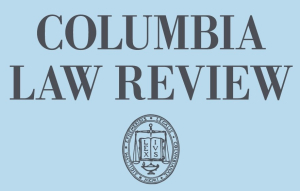 In the backdrop of calls to reform policing after decades of devastating police violence, particularly against people of color, this Note points to two concurrent phenomena that result in the federal tax code sanctioning benefits to the wealthiest taxpayers who lend to municipalities for police brutality settlements or judgments. The first phenomenon is cities electing to issue bonds to satisfy these costly payouts. These bonds have been coined “police brutality bonds.” The second is the opportunity for those in the top tax brackets to receive a tax benefit from collecting interest on municipal debt because municipal bond interest is tax-exempt. This Note argues that the federal tax code should not allow wealthy taxpayers to receive tax benefits from funding police brutality bonds.

Conclusion
Police brutality takes the lives of thousands of Americans and injures tens of thousands more each year. Young men of color, in particular, face the brunt of this violence. Academics have examined the human costs of police brutality, its causes and prevalence in our cities, and ways to reform policing to reduce harm and improve accountability. At the same time, creating systemic change around any problem requires understanding and grappling with the question of who benefits from that problem. With police brutality, at a time when cities pay hundreds of millions of dollars—if not billions—in settlements and judgements each year, this Note showed how the richest taxpayers receive a tax benefit from funding those payouts. This Note also contributed some ideas on how policymakers could eliminate that benefit.