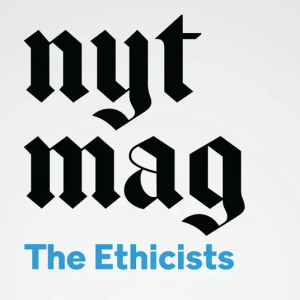 The magazine’s Ethicist columnist on whether taking a corporate law job means abandoning your values.

I come from a working-class family. I have worked very hard in school and graduated college with little debt, so when I was given the opportunity to attend an elite law school, I took it — along with a $150,000 price tag. Some people may scorn me for such a decision, but this was my dream school, and I saw it as a ticket to an echelon of society and opportunity that was otherwise entirely barred to me.

While I entered law school hoping to work in the public interest, I now face the reality of paying back my loans. I took an internship at a big law firm where I am paid very well, and I’ve been invited to work for them once I graduate. The salary would be enough for me to pay off my loans, help my family and establish a basic standard of living for myself — plus maybe own a house or even save for retirement, which would be impossible for me on a public-interest or government salary.

But the firm’s work entails defending large corporations that I’m ethically opposed to, including many polluters and companies that I feel are making the apocalyptic climate situation even worse. Even if I only stay at the firm for a short time to pay off my loans, I would be helping in these efforts for some time.

Basically, I feel torn between two value systems. The first is the value system of my parents, which prizes hard work and self-sufficiency. My parents are very proud of me for working in a high-level job that allows me to support myself. The second is my own personal moral code — the little idealist within me who wants me to drop the corporate angle in order to help as many people as I can, even if it results in a difficult life for me.

I know it is selfish to take this corporate job. But is it unforgivable? Will defending polluters, even for a short time in a junior position, be a permanent black mark on my life? Name Withheld

Congratulations on your achievements thus far — and on asking hard questions about how to use the skills and the qualifications you’re acquiring. Decisions like the one you face are complicated. ...

[F]or an adversarial legal system to function justly, there have to be lawyers who are willing to serve clients they disapprove of. If that’s a demerit, it has to appear on somebody’s moral scorecard. But surely it can’t be both good that somebody does it and a demerit for the person who has done it. ...

[O]ne party who matters here is you. Selfishness isn’t a matter of taking your interests and those of your loved ones into account; it’s a matter of giving those interests more weight than they deserve. Getting money to escape debt and help your family is a perfectly reasonable aim, consistent with being an ethically admirable person. But so is taking satisfaction in your work. If much of your time is spent in the service of corporate nogoodniks, you may well end up being unhappy. That’s not a choice you can be obliged to make. On the other hand, if you do become a partner in a firm like the one at which you’re interning, you may be able to change the balance of cases that the firm accepts. Or you could plan on switching jobs later to better align your livelihood with your values, defending the environment rather than those who ill use it. It’s altogether possible that your having worked at the high-paying law firm will give you valuable insight into how corporate polluters operate.

The calculus here involves all these conflicting considerations. Whichever way you go, I suspect, you will be able to do good. Your letter suggests that the “little idealist” within you won’t be taking early retirement; staying on the course you’re now on doesn’t mean that you’ll forget about the causes that matter.

David Lat, Notice And Comment: Can A Progressive Work In Biglaw?:

And are the attitudes of law students and young lawyers evolving on this issue?

I’m persuaded by Professor Appiah’s thoughtful response, and I know that many liberal and progressive law students and lawyers from years past would agree with him as well. But my anecdotal sense, from interviewing and writing about progressive law students today, is that views have shifted. I tried to channel one such student in my fictional open letter from the Dobbs leaker, justifying the leak:

No decent progressive—or human being—can work, for a summer or for a minute, for law firms that defend fossil-fuel companies and opioid manufacturers. The fact that these firms give people off on Juneteenth does not excuse their fundamental evilness—just as being nice to their dogs doesn’t make Republicans less evil, or giving out free SunChips doesn’t make FedSoc members less evil. If you are working on the side of injustice—or remaining silent in the face of injustice, which is not a neutral stance—I really don’t care how much pro-bono work you do, how you brake for small animals, or how courteous you are to store clerks. You are evil, full stop.

Okay, maybe that’s over the top, but imagine a more modest version of the argument: yes, corporations are entitled to lawyers, but they aren’t entitled to you. Let someone else defend the polluters and predatory lenders. No matter what Biglaw attorneys tell themselves so they can sleep at night, they are, at the end of the day, perpetuating and protecting a social and economic order that’s fundamentally unjust. As a progressive, you should want no part of that.