NY Times: A Catholic Podcasting Star Says Theocracy Is Not The Way 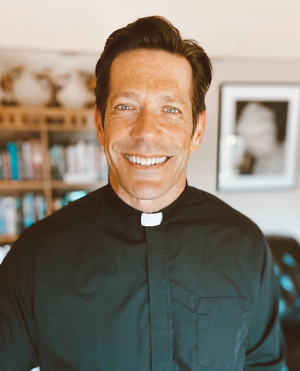 There are things that, at first blush, might appear marginal but are in truth major. Since it was introduced by the Catholic priest Mike Schmitz, who goes by Father Mike, in January 2021, the little-heralded “The Bible in a Year (With Fr. Mike Schmitz)” has been the most popular Apple religion podcast for a majority of 2021 and 2022 and has even, on two occasions, reached the No. 1 spot among all podcasts on Apple’s platform. The show has been downloaded 350 million times and an average of 750,000 times a day. Its popularity is easy to understand — the show goes down smoothly. Each 20-to-25-minute installment, designed according to a study plan developed by the Catholic biblical scholar Jeff Cavins, features two or three short scriptural readings and a pithy reflection by Father Mike, an affable 47-year-old Midwesterner whose upbeat and self-deprecating manner — not to mention regular-guy good looks — exude strong Ted Lasso vibes. The staggering success of the podcast has helped turn its host, whose day job is as a chaplain at the University of Minnesota Duluth and the director of the youth ministry for the Duluth diocese, into a kind of celebrity. He travels the country giving speeches, and some of his YouTube videos have racked up millions of views. This all comes at a moment, of course, when the church, like so many of our institutions, finds itself firmly at the heart of roiling social tensions — a fact of which Father Mike is keenly conscious. “I know a lot of my own brokenness and faults,” he says about the challenge of becoming a public figure. “I hate the idea of misrepresenting God or the church because of them.”

Before you and I spoke, I asked if you could send me the names of some books that were important to you, all of which I then read. And I’ve been listening to your podcast for a while and watching your YouTube videos. I also read almost all the books you've written [Made for Love: Same-Sex Attraction and the Catholic Church (2017); Beautiful Hope: Finding Hope Everyday in a Broken World (2018); How to Make Great Decisions (2019); Pray, Decide, and Don't Worry: Five Steps to Discerning God's Will (2019); A World Undone: Finding God When Life Doesn't Make Sense (2020); Untroubled by the Unknown: Trusting God in Every Moment (2022); The Bible in a Year Companion, Volume I (2022); The Bible in a Year Companion, Volume II (2022); The Bible in a Year Companion, Volume III (2022)]. There’s a lot of love and beauty in so much of it. But I can’t, as you put it, wrap my heart around any teaching saying that gay sex is “disordered,” or that because of an abortion ban at six weeks, a 10-year-old girl who was impregnated via rape should have to travel from one state to another to get one or that women with ectopic pregnancies could potentially be denied procedures. Can you help me understand where the heart is in that?

Those questions are the ones that probably people would have some of the biggest objections to because there is such heart behind the whole thing. Where even to begin? Maybe the first thing would be trying to articulate how Christians, how Catholics, how I see people. Whether that be someone seeking an abortion for the reasons you mentioned or any other reason, or someone who’s like, “My entire life I’ve been attracted to members of my same sex.” In both of those cases, one of the common experiences is a feeling of I’m alone. There can be a great experience of shame, of isolation. So one of my impulses is not to say, “Well, here’s what the church teaches and here’s what this means.” It is to say, “Here’s an opportunity for you to be seen, for someone to know this thing that you maybe kept secret because of shame or whatever reason, to hear that you’re loved truly, without condition.” Maybe someone won’t believe me, but that’s the first thing. Because I believe that while our circumstances can be unique, every one of us knows what it is to be rejected and to experience shame. That’s the baseline. What do you think?

Well, your answer was about how you try to talk with people about these things. I’m trying to better understand the heart behind the teaching. That’s the piece I’m missing and want to understand. Does that make sense? I think so. Here’s how I see it. Every human being is made in God’s image and likeness, which means intrinsically every human being has worth and is good. That’s the first step. The second step is that we believe in original sin. Here’s this world, and here’s these people that are good but broken. Every one of us has experienced that brokenness in any number of ways. Every human being I’ve talked to has, to some degree, a disordered, we say broken, we say an issue with sexuality. The Christian message in all this is: You are good. You matter. God knows your name, and he’s entered into the brokenness so that you don’t have to be there alone. It doesn’t have to be the thing that defines your life. All of Christianity can be summed up in this one question and answer: Does God have permission to love you as you are? If I say he can love me now, it’s not just a matter of a feeling of this affection. It’s letting that love change me. When I say that, I’m not saying those desires are gone or that I’m no longer pregnant. What I’m saying is, OK, if God has my permission to love me as I am right now, that means I don’t have to walk in shame. That means I’m not walking alone. It means, in many ways, that my heart gets to be changed. When it comes to the big issues, the question is still the same, and the answer needs to be given: Does God have your permission to love you as you are right now? Yes or no?