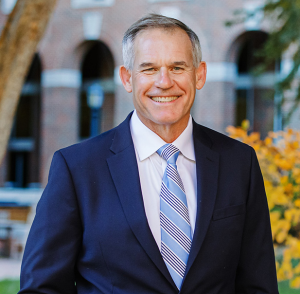 After nearly a decade in the role, Doug Shackelford has suddenly stepped down as the dean of the UNC Kenan-Flagler Business School.

Shackelford's abrupt retirement is effective today following the university announcing the move on Friday afternoon. A specific reason for the timing of the decision was not given. ...

Shackelford's retirement comes a few weeks after a former UNC-Chapel Hill student, Angelica Rose Brown, filed a lawsuit against three Kenan-Flagler professors and the UNC Board of Governors alleging race discrimination and retaliation. Shackelford is not mentioned in the lawsuit, which was filed Aug. 30 in the U.S. District Court for North Carolina’s Middle District.

The Daily Tar Heel reports that in a letter sent to faculty and staff Friday morning, Shackelford said, "I have run as hard as I could for as long as I could. I can’t continue at the pace this School deserves. I regret that I didn’t anticipate things better. I could tell that I was not recovering from long weeks as quickly as I had in the past and I was unduly frustrated at times, but I failed to foresee this timing." ...

His departure from the university follows other shakeups at the dean-level over the year. UNC-Chapel Hill began this semester with seven new deans.

It was over a belated vacation last week that Doug Shackelford finally concluded that he wants his life back.

The dean of the Kenan-Flagler Business School at the University of North Carolina announced to faculty, staff and students on Friday he would step down from the job he has held since 2014. The real shocker: His last day as dean would be just three days later on Monday (Sept. 19). ...

In an interview with Poets&Quants, Shackelford says he had been actively considering leaving the job before his vacation but as the phone calls, emails and text messages piled up while he was trying to get away, he made the final decision to call it quits.

“I had been in some conversations before then and it just seemed like the right thing to do but then I went on vacation and the emails keep coming and I looked at my calendar from now until Thanksgiving and I was going to be in the office for one day out of every five per week with the rest of the time on the road. Maybe five years ago I could do that but you just start to look at that differently. At some point, you just get run down. There is the tired you recover from with a weekend or a vacation or there is the other kind of tired that doesn’t go away.”

His schedule was so packed during the summer months that he could not take any meaningful time off. “My wife and I slipped down to the beach back in August for a weekend and I was on the phone the entire trip down there and on email the trip back. While I was there, I had one foot in the sand and water and another on the iPad. It is a little hard to find a break.”

His family encouraged him to make a real break. “For some time now, my wife and kids have been saying the clock is running out,” says Shackelford. “The last year or so has been particularly difficult. COVID was like Dog Years. I don’t know if the job is getting harder or I am getting older but the combination leads to a safe place for all of us. My wife and kids are very happy. I am a bag of mixed emotions today. I probably could have dragged this out a little longer but at some point you realize it’s time to give somebody else a chance to lead the school.” ...

Born in North Carolina, he graduated from the University of North Carolina at Chapel Hill in 1980 and went immediately to work for what was then Arthur Andersen as a senior tax consultant from 1981 to 1985 when he entered the PhD program in business administration at the University of Michigan’s Ross School of Business. Armed with his Phd and expertise in the field of taxation, Shackelford returned to his alma mater in 1990 as an assistant professor.