Following up on my previous posts (links below):  a Cleveland State committee unanimously recommended removing "Marshall" from its law school's name: 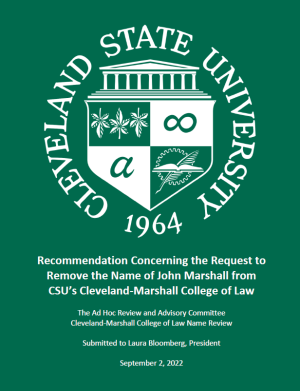 Conclusion and Recommendation
Based on our study of the issues and the reasons set forth above, the Ad Hoc Committee voted unanimously to recommend to President Bloomberg that the name Marshall be removed from the name of CSU’s College of Law.

The reasons for this recommendation are set forth in greater detail throughout the report. However, in summary, the primary reasons include:

If Cleveland State University removes the Marshall name in November, it will become the third law school in the span of 18 months to change names in response to the misdeeds of a historical namesake. The University of Illinois at Chicago School of Law dropped Marshall from its name in May 2021, after nearly a year of discussion among students and alumni.