We study the progress of women’s representation and achievement in law schools. To do this, we assemble a new dataset on the number of women and men students, faculty, and deans at all ABA-approved U.S. law schools from 1948 to the present. These data enable us to study many unexplored features of women’s progress in law schools for the first time, including the process by which women initially gained access to each law school, the variance in women’s experiences across law schools, the relationship between women’s representation and student achievement, and the extent to which women occupy lower status faculty and deanship positions. We contextualize our findings by situating them within the vast qualitative literature on women’s experiences in law schools and the legal profession. 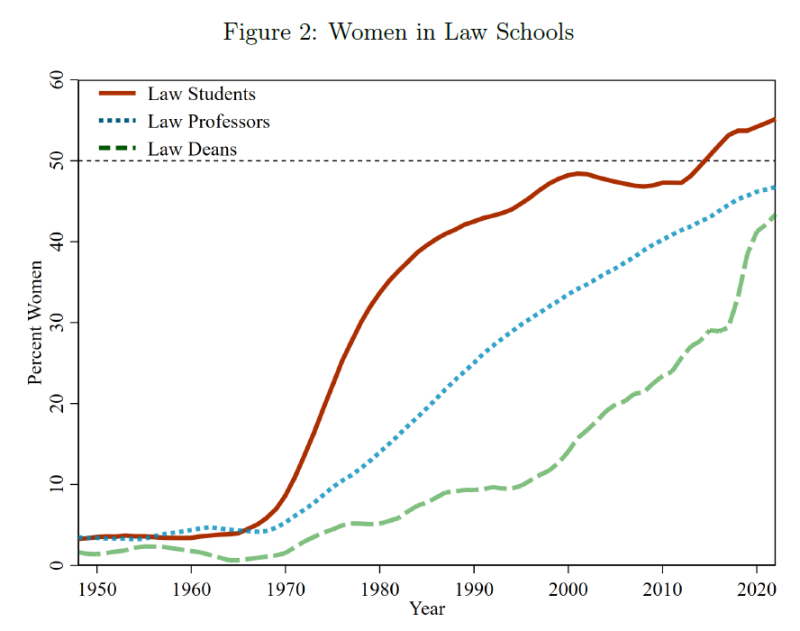 First, and in contrast with prior literature, we showed that women’s initial access to law schools substantially increased in the 1960s. Throughout the 1940s and 1950s, there was virtually no change in women’s representation, 15-20 percent of law schools had no women students, and 50-60 percent had no women professors. The era of men-only classes rapidly ended in the early 1960s. Faculty followed in the late 1960s. In contrast to Drachman (1998), who observes that women made few advances in the legal field between the 1930s and mid-1970s, and Fossum (1983), who similarly concludes that 1972 is the “pivotal year in terms of the sexual integration of law school student bodies,” our results suggest that the pivotal moment in women’s progress occurred a decade earlier in the 1960s.

Second, law schools have increasingly sorted along gender lines. After women’s shares of enrollment, faculty, and deans all experienced a near-simultaneous positive trend break in 1970, substantial differences across schools emerged and continue to persist. Within a law school, women’s historical (pre-1970) enrollment shares are strongly correlated with enrollment shares in every subsequent decade. The correlation between a law school’s faculty share and enrollment share has grown stronger over time; only part of this is explained by the law school’s location.

Third, compared to their share of potential candidates (recent college graduates), women were historically most underrepresented among law students. Women’s shares of faculty and deans, by contrast, more closely tracked their shares of potential candidates (JD holders and experienced law professors, respectively). The latter result, however, is undermined by the fact that women tended to occupy lower status faculty and deanship positions.

Fourth, women historically graduated at lower rates than men, but closed the gap by 1970. We offered suggestive evidence against the hypothesis that the increase in women’s relative achievement was caused by increases in women students (via “peer effects”) or by increases in women professors (via “mentorship effects”).

Our results provide a long run empirical framework within which to situate the vast qualitative literature on women’s experiences in law schools and the legal profession.