The Effect Of Tax Reform And COVID-19 On Tax Flight Among U.S. Millionaires

Taxing the rich is one of the central policy debates in this time of rising inequality. Elite taxation can change the distribution of income in society, support equitable growth, and finance public goods and services that improve the quality of life for everyone. None of these goals are well served, however, if taxes lead to high levels of tax flight among U.S. millionaires. Progressive taxation, especially at the state level, ultimately depends on the embeddedness of the tax base. In other words, are the rich “mobile millionaires,” readily drawn to places with lower tax rates? Or are they “embedded elites,” who are reluctant to migrate away from places where they have been highly successful?

Supply-side economics has long argued that taxes on the rich cause avoidance behavior and reduce the incentive to work, invest, and innovate. Amid the growing red state/blue state rivalry in the United States, tax incentives for migration have become a new focus of debate. Why would rich people continue to live in New York, New Jersey, or California when they could save large sums in taxes by moving to places such as Florida, Texas, or Nevada? Of course, taxes also fund public goods that the rich consume—not even the richest city dweller can get to work without public infrastructure—but top earners have greater ability to opt out of many public services such as schools and social services. From this view, the rich seem motivated and mobile—sensitive to taxation and readily capable of exit.

Yet there are myriad social dimensions that rich households face when migrating to avoid taxes. Top earners are often the “working rich,” with many roots in the places where they built their careers. Others are business owners with complex ties between customers, suppliers, and workers that are not easily relocated. Top earners are often married, have school-aged children, and have lived in their state for many years—social factors that tie people to places. These ties represent place-specific social capital, a form of embeddedness that makes migration costly.

Our new working paper, Taxing the Rich: How Incentives and Embeddedness Shape Millionaire Tax Flight, examines the joint effect of incentives and embeddedness on the mobility of the rich in the United States. Drawing on administrative tax data from IRS tax returns of top income earners, we study two large-scale “natural experiments,” which are contrasting real-life situations that social scientists investigate to determine cause-and-effect relationships. The first is the federal Tax Cuts and Jobs Act of 2017, which changed tax incentives to favor low-tax states. The second is the COVID-19 pandemic, which began in early 2020 in the United States and which deeply disrupted people’s socioeconomic attachments to places. ...

In a typical year, a small number of millionaires circulate between states: Roughly 2.7 percent of the millionaire population moves across state lines, exchanging one state for another. How much did the 2017 tax reform influence this migration? In our working paper, we examined migration rates for every income group, starting from those with the lowest incomes to those making $5 million a year or more. We also examined migration rates for those living in low-tax states, who were incentivized to stay, and high-tax states, who were incentivized to move. Migration patterns before and after the tax reform law passed were essentially identical. (See Figure 1.) 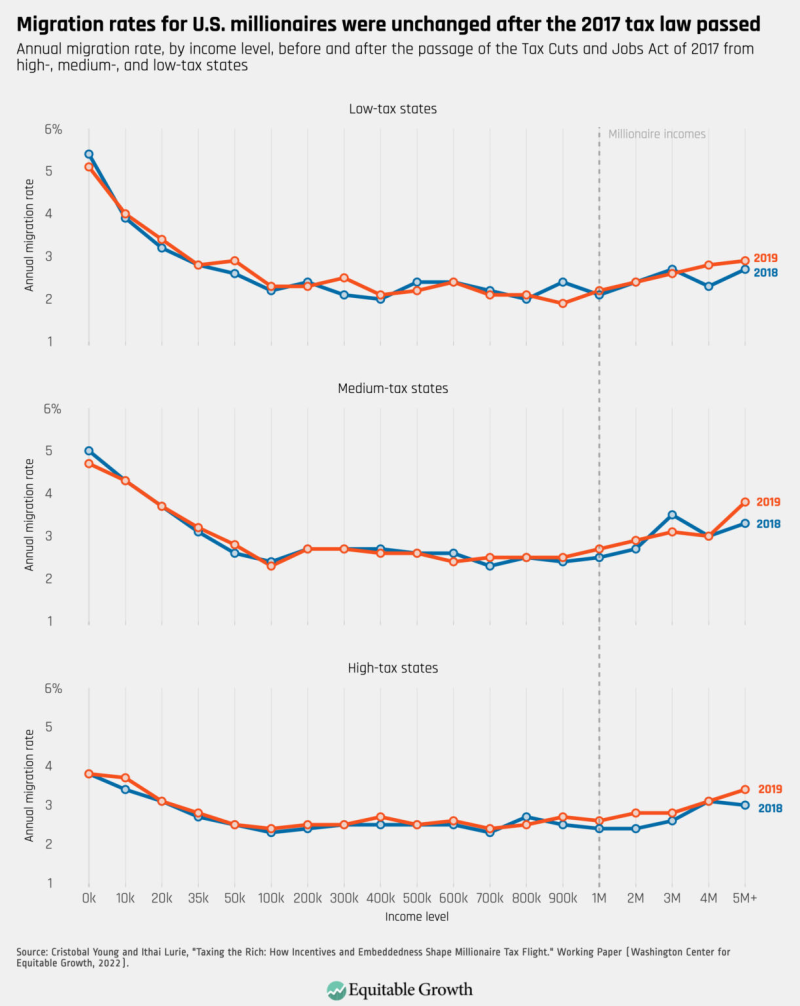 We find a clear rise in migration out of high-tax states, especially among higher-income earners, a very modest pandemic migration effect among middle-tax states, and no change in migration rates among low-tax states during the pandemic. (See Figure 2.) 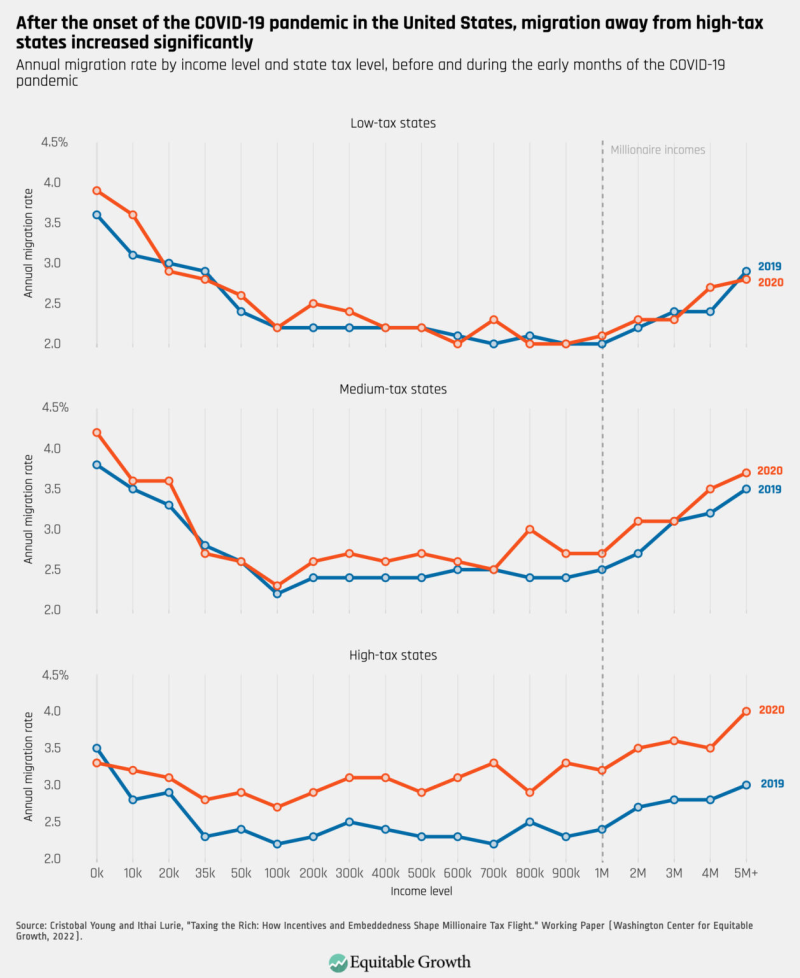