The debate over faculty tenure has proceeded despite a glaring absence of data on tenure’s real-world operations as an employment practice. I use an original, manually-assembled dataset of “tenured-terminations” from 2000 to 2021 to offer a first look into the landscape of tenured employment via instances where tenure was overcome. The data show reveal remarkable patterns in the demographics and circumstances of tenured-terminations. The data also trouble assumptions about the misuse of academic freedom by illuminating the narratives and counternarratives advanced by the universities and faculty who are involved in tenured-terminations. These findings have implications for supporters and critics of tenure alike. 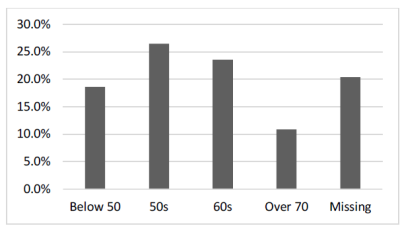 Conclusion
This Article provided a first ever empirical assessment of faculty tenure as an employment practice via a study of tenured-terminations. To my knowledge, no other study examines tenure across boundaries of region, discipline, and institutional type. Likewise, no other study focuses on the terminations of tenured faculty. Given escalating legislative efforts to statutorily restrict or abolish tenure, information about the employment action that tenure most famously protects against that is not limited by context is particularly valuable.

Nevertheless, this study is just a preliminary step towards understanding tenure’s realworld effects. Studying terminations alone means that we cannot really assess university responses to specific kinds of faculty action, or the efficacy of any given faculty counternarrative—most importantly, the counternarrative that a university’s efforts to discipline or terminate violates academic freedom. Meanwhile, studying individual terminations instead of reductions-in-force means that we cannot accurately evaluate tenure’s efficacy as a form of job security because, without RIFs, we are not accounting for all the ways in which tenured employment is equally subject to market forces and employer prerogative as non-academic employment.64 There is much more research to be done before either critics or supporters of tenure can confidently assert that their arguments are informed by actual practice as well as or instead of ideology.

The tenured-terminations data thus establish preliminary patterns in a landscape that is otherwise largely devoid of empirical detail. A few of those patterns, especially regarding faculty gender and the disciplinary affiliations of faculty who articulate Academic Freedom counternarratives, may track anticipated outcomes. But even longstanding observers of U.S. higher education are likely to find many of the results surprising or revealing. Tenured faculty at public universities are disproportionately likely to be terminated while tenured Black and Hispanic faculty are not more likely to be terminated. Tenured faculty at Masters institutions are far more likely to be involuntarily fired than their colleagues at Baccalaureate and Doctoral institutions; conversely, faculty with better exit options or fewer remaining years of employment did not voluntarily resign at higher rates. And while most tenured-terminations occur in response to a classic bad act, sexual misconduct, none of the faculty accused of sexual misconduct by their universities articulated an Academic Freedom counternarrative that might be characterized as “bad faith.” Critics of tenure, as well as supporters interested in defending its value, should account for these insights when developing their arguments.