Henderson: The End Of The 'End Of History' Era — Extreme Wealth Concentration

Bill Henderson (Indiana), The End of the “End of History” Era: 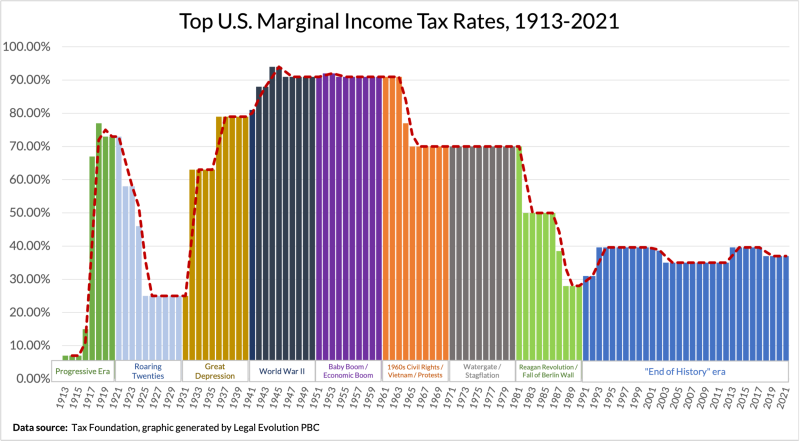 Apolitical technicians working in an ahistorical profession. What are the odds of a happy ending?

The graphic above summarizes the U.S. top marginal income tax rate from 1913 (the year the 16th Amendment was ratified by the states) to 2021. One clear takeaway is that for the vast bulk of the 20th century, the wealthy paid much higher taxes.

As the graphic suggests, however, that changed with the election of Ronald Reagan, whose inaugural address launched an ideological revolution with a simple and memorable message: “government is not the solution to our problem, government is the problem.” Reagan Inaugural Address (Jan 21, 1981). Thus, with the public’s consent, top marginal tax rates were slashed throughout the 1980s. At the 1988 Republican Convention, George H.W. Bush (Reagan’s VP) spoke the words, “read my lips: no new tax,” which helped him defeat Michael Dukakis in the general election. See Lily Rothman, “The Story Behind George H.W. Bush’s Famous ‘Read My Lips, No New Taxes’ Promise,” Time, Dec 1, 2018. Yet, the political mood of the late 1980s was also strongly anti-deficit. In 1990, when Congress enacted pay-as-you-go rules for federal budgeting, Bush, who was saddled with a massive Saving & Loan bailout, agreed to increase the top marginal rate from 28% to 31% — an act that arguably ended his political career. See Howard Gleckman, “Reading President Bush’s Lips,” Tax Policy Center, Dec 5, 2018.

Since the early 1990s, much of the electorate has enjoyed the political stability and relative economic prosperity of the “End of History” era, which is a reference to Francis Fukuyama’s famous 1989 essay and 1992 book. Surveying the geopolitical landscape, including the market-based reforms being implemented in China and the former Soviet Union, Fukuyama concluded that there were no longer any “viable systematic alternatives to Western liberalism.” Fukuyama, “The End of History?,” The National Interest (Summer 1989) at 3. Full global realization and consciousness may not occur for a few more decades, as small-scale governments based on nationalism or religion would likely linger. But, Fukuyama argued, the outcome of history was no longer in doubt.

I would argue that over the last three decades, a large portion of the legal profession (myself included) slipped into a comfortable “End of History” cocoon. As we built our careers, sent our kids to highly ranked universities, and monitored the size and status of our retirement accounts, we took political stability as a given. Thus, we became oblivious to growing fissures and cracks that might threaten the rule of law. Can an ahistorical profession be learned? ...

Today’s post is a bridge between Part I, which focused on the original Gilded Age lawyers (Post 312), and next Sunday’s Part II, which will carefully consider three empirically based theories of national decline.

In Part I, I acknowledged that for nearly four decades, virtually all my life decisions were premised on the unstated assumption of ongoing (perhaps unending?) political stability and relative economic prosperity (the unstated assumption). However, after living through the national and global turmoil of the last several years, including past and potential future coup attempts against the U.S. government, my unstated assumption has been revealed to be foolish and decadent wishcasting. ... 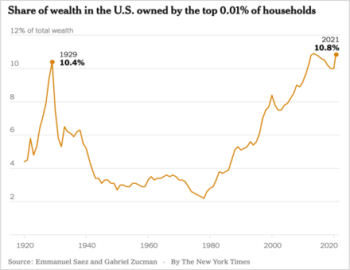 Thus, in building my sturdier intellectual frame, Part I focused on the Gilded Age lawyers, as this was a time, like the present, when the nation experienced vast economic inequality combined with growing political populism. See right graphic (originally appeared in Part I).

One of the most important legislative responses to the Gilded Age was the passage of the Sherman Antitrust Act of 1890. ...

[T]ax policy is a second important tool for unwinding extreme concentrations of wealth. In the early 1930s, in an attempt to climb out of the abyss, our elected representatives made the decision to impose enormously high taxes on the gilded class, a state of affairs that lasted for a full half-century. See today’s lead graphic. Thus, the grand North Shore estates of Gilded Age lawyers became economically unsustainable and were parcelled out to developers. See Part I. Eventually, however, enough time passes (and generations die off) to permit new narratives that can justify the scaling back of seemingly old policies. Cf Wallace C. Turbeville, “Owning the Consequences: Clinton and the Repeal of Glass-Steagall,” Demos, Sept 11, 2015 (written by a lawyer who worked for Goldman Sachs but eventually left to become an advocate of financial re-regulation).

Since the late 1980s, mainstream political discourse has been bounded by a shared belief among Democrats and Republicans that higher taxes on the wealthy will undermine the employment and retirement prospects of the broader population. And remarkably, this also describes the present. See, e.g., Jake Johnson, “‘Really inexcusable’: Democrats set to let unpopular Trump tax cuts for the wealthy stay in place,” Salon, July 27, 2022 (quoting Amy Hanauer, executive director of the Institute on Taxation and Economic Policy); Richard Rubin,”Democrats’ Failures So Far on Tax Policy Spur,” Wall Street Journal, July 26, 2022 (“[N]early five years after moderate and progressive Democrats united in opposition to the 2017 tax overhaul pushed by then-President Donald Trump, it is likely to remain largely intact for the foreseeable future.”).

It’s hard to resist the conclusion that we’ve become a republic incapable of seeing, understanding, and solving our own problems. Further, disrupting this stupor may take a shock on par with what the nation experienced in the early 1930s. Our intellectual frame needs to grapple with the future without illusions. This is why next week’s Part II is focused on three empirically based theories of national decline.