God, The Bible, And Hamilton

Longtime readers know of my obsession with interest in Hamilton, especially the faith aspects of the play (see C.S. Lewis & Lin-Manuel Miranda: How I Found My Faith In Mere Christianity And Deepened It In Hamilton and the links below). I just came across these great books and article:

Kevin Cloud, God and Hamilton: Spiritual Themes from the Life of Alexander Hamilton and the Broadway Musical He Inspired: 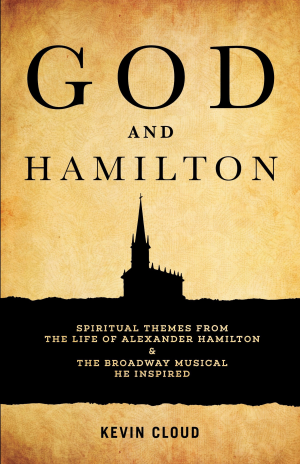 Hamilton―the hip-hop musical about a forgotten Founding Father―is the most compelling musical of our time. But if you watch it without understanding the spiritual themes of Alexander Hamilton’s life, you only get half the story. Discover how Hamilton is a modern-day parable that will:

God and Hamilton impressively weaves together insights from the musical itself, the lives of Alexander and Eliza Hamilton, and the story of Scripture into a tapestry that challenges people of faith to reexamine their lives.

God and Hamilton turned me inside out and revealed a side of Hamilton I had never thought to explore.―Lauren Boyd, Hamilton Broadway Cast

A bold and creative exploration of the themes in life that matter most. In this beautiful book, Kevin Cloud helps us see, listen, and open to the all-consuming love God pours out to us.―Phileen Heurtz, Founding Partner, Gravity, a Center for Contemplative Activism

For all who struggle with doubt, depression, and despair, God and Hamilton offers an inspiring way forward. Kevin Cloud’s book made my heart sing!―Craig Detweiler, President, Seattle School of Theology and Sociology

The hit Broadway musical Hamilton [is] highly literate, loaded with references to the Founding documents, the age of Enlightenment, Shakespeare, contemporary rap—and of course, the Bible.

I saw the show last month, but have been as obsessed with the Hamilton soundtrack (which you can listen to in its entirety) as anyone for a long time. ... The longer I listened, the more intentional quotations of and resonance with the Bible and a handful of Christian theological concepts I heard.

And I got interested. This display of biblical literacy is good for the show: it enriches both its sense of history—the Founders, whatever their individual beliefs, were conversant in the Bible—and in several cases builds out the story’s themes and characters in ways that make them even more complex and fascinating.

So I investigated, and here are the results: 18 times Hamilton directly references the Bible or Christian theological concepts, with short explanations, for any fan of the soundtrack or the show. I’ve ordered them by the order in which the tracks appear on the album. (And I hope I didn’t miss any.) ...

My Shot
Foes oppose us, we take an honest stand
We roll like Moses, claimin’ our promised land

This is an obvious reference: Moses led the Hebrews from slavery in Egypt to the land of Canaan, but they had to fight to take it. (Technically Moses never entered the Promised Land; that was left to Joshua.) The hymn “On Jordan’s Stormy Banks,” written by British Seventh Day Baptist minister Samuel Stennett, is contemporary with Hamilton’s setting—it was first published in 1787—and became popular in 19th-century America thanks to camp meetings.

But there are a lot more layers in here. The story of the Promised Land looms especially large in the imagination of both Civil War-era slaves longing for freedom and the Underground Railroad. “Swing Low, Sweet Chariot,” “Michael, Row the Boat Ashore,” and “Wade in the Water” are three of dozens of spirituals that use the imagery—which brilliantly managed to express a longing for freedom, call up Christian language to assuage those who would put down rebellion, and sometimes function as coded instructions for escape. The deep link to the Exodus story is also why Harriet Tubman was called “Grandma Moses.” The Civil Rights movement later drew on the same story, with Martin Luther King Jr. bringing it up repeatedly in his rhetoric; the movement revived many old spirituals as protest songs, as well as making oblique references to the Exodus in songs like “We Shall Not Be Moved” and “We Shall Overcome.”

A Winter’s Ball
Watch this obnoxious, arrogant, loudmouth bother
Be seated on the right hand of the father

Aaron Burr (who acts as our de facto and annoyed narrator throughout the show) is describing Hamilton, who has just been appointed to be George Washington’s “right-hand man.” Washington is the “father of our country,” but this is a double reference: it’s the exact wording the Bible frequently uses to talk about where Jesus sits, interceding on behalf of mortals (Matthew 22:44; Acts 2:33, 7:55; Romans 8:34; Ephesians 1:20; Colossians 3:1; Hebrews 1:3, 8:1, 10:12, 12:2; 1 Peter 3:22, for starters). It’s such a frequent reference that the same phrasing appears in both the Nicene Creed and the Apostles’ Creed, which many Christian churches recite every Sunday as part of their liturgy. ...

As we noted here in CT last month, Hamilton was religious as a young man, less so for a long while, but then returned to his faith after the tragic death of his son Philip. The “sign of the cross” he refers to is employed by some Christian denominations, in which the forehead, chest, and shoulders are touched, often accompanied by the statement “In the name of the Father, and of the Son, and of the Holy Ghost.” It serves as a reminder of the Trinity that isn’t just mental but also physical, inscribing the reminder onto our person again and again. 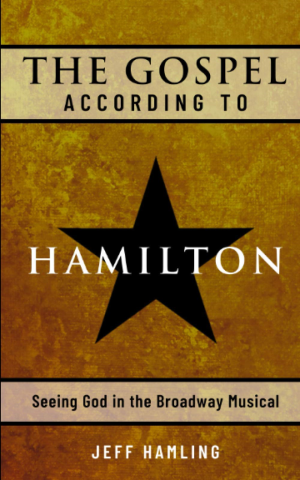 This engaging book will feed your soul and deepen your appreciation for the brilliant, grace-filled story of Hamilton. You will find yourself delighting in Jesus as you consider the humor of King George, the grace of Eliza, and the ambition of Burr. Each chapter brims with thoughtful, theological reflection as the Scriptures dance alongside the characters and their stories.

The Gospel According to Hamilton will help you to:

Does Hamilton capture your heart, evoking a deep emotional response to the lyrics and the themes? Hamling explains well the relationship between the musical and God’s story of redemption. He finds in Miranda’s popular production numerous themes that speak to us of our deepest needs and desires, describing how we desperately want meaning and purpose in our lives. Hamling is a thoughtful writer with a keen eye for beauty and meaning in that beauty. Read The Gospel According to Hamilton if you want to appreciate Miranda’s work and its appeal to us through our need for God.―P.J. Hill, Professor Emeritus, Wheaton College

For more on God, the Bible, and Hamilton, see:

Park Avenue Christian Church, The Gospel According to Hamilton:

For “The Gospel According to Hamilton,” The Park invited over 40 ministers from around the United States to each preach a sermon inspired by a song from the ground-breaking Broadway musical “Hamilton.” In pairing songs with sacred texts of their choosing, these preachers explore how the music of Hamilton inspires and informs their faith, and they contribute their sermons to this collection so that the good news of God’s love and justice at work in the world may be known to new people through a shared appreciation of this work of art.  [Links to the 40 sermon videos are here]