David French (The Dispatch), Christian Political Ethics Are Upside Down:

Three things are true at once. First, the United States is the most Christian advanced democracy in the world. Even with declining rates of religious belief and declining rates of church attendance, a solid supermajority (65 percent) of Americans identify as Christian. ...

Second, both the Republican and Democratic parties are utterly dependent upon their most devout members for their electoral success. As I’ve noted before, nonwhite Democrats (and especially black Democrats) are among the most God-fearing, churchgoing members of American society. At the same time, the Republican Party would be irrelevant without its own white Evangelical base. ...

Third, American political culture is a toxic, hyperpartisan, corrupt, and increasingly violent mess. Given the first two factors mentioned above, this should not be. After all, Jesus could not have been more clear. In John 13, he declared, “By this everyone will know that you are my disciples, if you love one another.” That’s the dream. Here’s the reality: 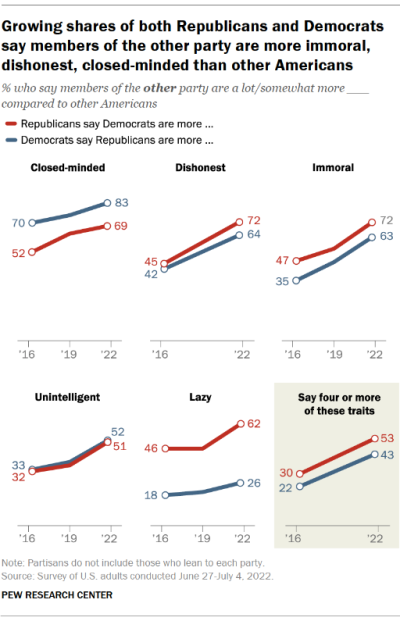 Again, remember that both of these coalitions are chock-full of Christians. It is not the case (at least not yet) that America has one religious party and one secular party. The mutual loathing you see comes from people who could recite every syllable of the Apostles’ Creed side-by-side and believe wholeheartedly in the divine inspiration of scripture.

How does this happen? The longer I live the more convinced I am that our Christian political ethic is upside down. On a bipartisan basis, the church has formed its members to be adamant about policies that are difficult and contingent and flexible about virtues that are clear and mandatory.

In many ways, each of those virtues is in tension with each other. Humility requires us to acknowledge our own limitations and inability to formulate political responses to complex human problems. For example, how do you close the racial achievement gap in American education? What are the just limits of individual liberty? How do you decrease violent crime? Is there a path to public safety that does not include mass incarceration?

Yet while we can and should recognize the possibility that we can be wrong, we can’t be paralyzed into inaction. We might be wrong, but we have to try to do what’s right, as best as we can discern it.

But then the instant we press on to “do justice” the demand to “love kindness” appears to block the way. How many times have we heard the claim that the “old rules” of civility and decency are simply inadequate for the times? That’s a core argument of the new right, for example. We tried decency, they say, and it didn’t work. Now is the time to punch back.

Yet that mindset is utterly antithetical to the Christian moral ethic. You’re not kind until kindness doesn’t work. You’re to be kind even through the most brutal acts of repression and in the face of complete political defeat.

In the face of the moral complexity and difficulty of the true Christian moral call, we’ve created a hierarchy of values. It’s not that we absolutely reject kindness or humility or decency. It’s not that we’re going to condemn the fruit of the spirit—love, joy, peace, patience, kindness, goodness, faithfulness, gentleness, and self-control—it’s just that they’re “secondary values.” When push comes to shove, it’s our vision of justice that matters. ...

That conception of justice gives us a frame for discussing policy. It does not provide the specific answers. Biblical virtues, by contrast, are far more precise and far more detailed. This makes sense, especially for scripture that is intended to guide us in all nations, in all times. The “what” of politics (the specific policies we support) will evolve. They’ll often be debatable. We’ll have uncertain answers to complex questions.

But the “how” of politics—the virtues we display as we engage—don’t evolve at all. The fruit of the spirit is timeless. There is no political emergency that justifies a departure from these core values. Scripture anticipates that Christians will face evil, yet the command is clear: “See to it that no one repays evil for evil to anyone, but always pursue what is good for one another and for all.”

Yes, we say. Yes to all of this. Right until the moment when we think that our kindness, our faithfulness, or our humility carries with it a concrete political cost. We think we know what’s just, and we can’t do justice without power.

And so, in our arrogance, we think we know better than God. We can’t let kindness or humility stand in the way of justice. Yet we’re sowing the wind, and now we reap the whirlwind. The world’s most-Christian advanced nation is tearing itself apart, and its millions of believers bear much of the blame.