Are Law Schools Raising Their Attrition And Transfer Rates To Boost Their Bar Exam Pass Rates?

Law schools are held accountable on many fronts to achieve and maintain high bar passage rates. ABA Standard 316 is likely the strongest accountability measure. While the course of legal education itself, along with academic and bar success interventions, is a key driver of bar exam performance, Bahadur et al. suggests that other, obscure institutional practices can serve to inflate institutional bar passage performance [Academic Attrition And Transfers, Not Pedagogy, Drive A Law School's Bar Exam Performance]. Such practices could include recruitment and admission of transfer students and academic attrition. We examine this hypothesis to assess the influence of both attrition and transfer on law schools’ bar passage rates. ...

The initial phase of investigating Bahadur et al.’s claim is to examine whether relationships exist between a school’s attrition and transfer rates and both its pass differential and LSAT/UGPA index score.

At first glance, there does appear to be a relationship between a school’s first-time pass differential and its rates of attrition and transfer (see Figure 1). 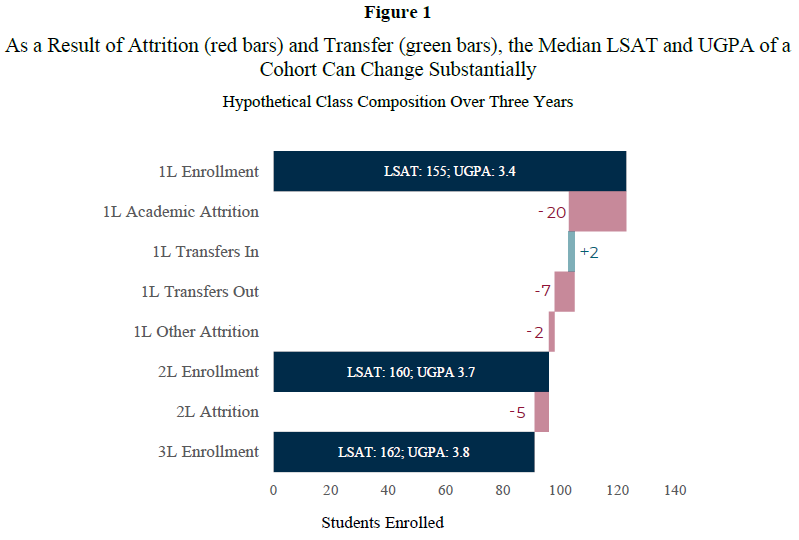 Furthermore, there is evidence of a relationship (albeit curvilinear for transfer-in rates) between a school’s median LSAT/UGPA index score and both its attrition and transfer rates. ... 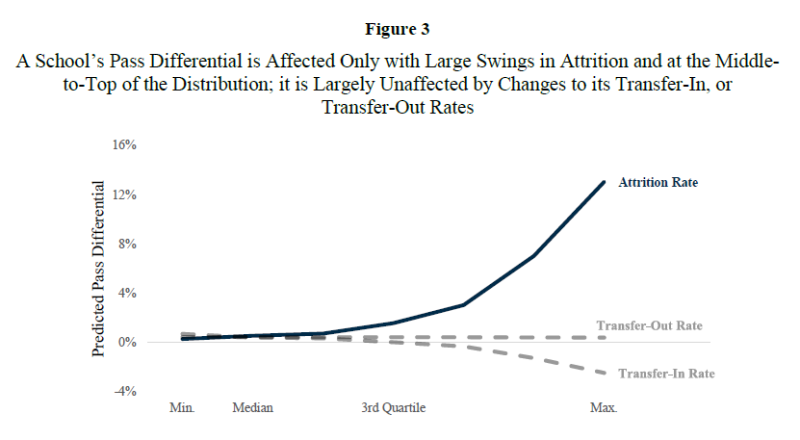 Combining our statistical results with a descriptive look at those schools with average or above- average attrition and transfer-in rates, there is only limited and, in some ways, contradictory evidence to support the supposition that, on average, schools leverage their attrition and transfer rates to bolster their bar performance substantively affect a school’s bar passage rates. 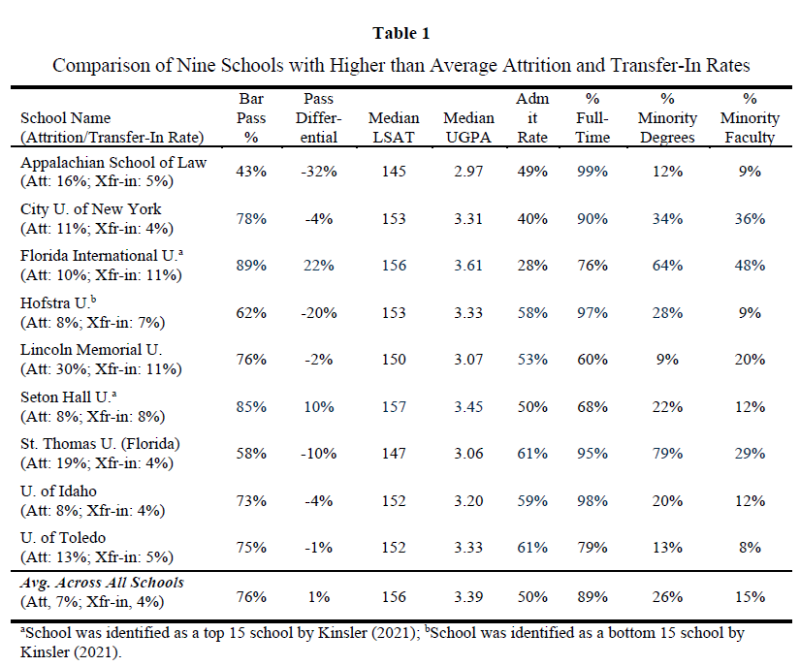 Conclusion
Some researchers have expressed concerns about schools using attrition and transfer policies to inflate bar passage rates (Bahadur et al. 2021), an interesting thesis worthy of attention considering the implications for academic and bar success professionals whose efforts to prepare law students for the bar exam could be undermined if certain institutions are found to take shortcuts to bar passage improvement. However, our research only finds limited evidence to support this notion: attrition rates are positively associated with pass differential; transfer-in rates are negatively associated. (Transfer-out rates do not appear to have a meaningful impact on pass differential.)

Finally, some actors in legal education have proposed that lower-ranked schools face undue difficulty complying with ABA accreditation standards because they are vulnerable to losing their top performers to higher-ranked schools via transfer (e.g., Garcia et al., 2016; Society of American Law Teachers [SALT], 2019). Given that lower-ranked schools are inherently more vulnerable to being harmed by this dynamic, some have suggested that a type of credit-sharing or acknowledgement of transfer students’ original law school in bar passage statistics is in order (Garcia et. al, 2016; SALT, 2019). The ABA also acknowledges in its Standard 316 Guidance Memo that some students may transfer out of a school and pass the bar exam as a graduate of another law school, and it enables noncompliant institutions to use evidence of such trends to demonstrate “good cause” to extend the time they are given to reenter compliance with the Standard (ABA, 2019, pg. 3).

Our results suggest that, on average, transfer-out rates generally do not significantly harm pass differentials, nor do transfer-in rates significantly bolster pass differentials. And although we find that institutional bar passage rates fall as transfer rates increase, the reduction only lowers the pass differential by a percentage point or less. Nonetheless, law schools that fall only a percentage point short of the 75 percent benchmark may use our results to show that there is a high probability that losing students to transfer reduced their passage rate just enough to fall out of compliance. This argument is likely effective for schools with smaller cohort sizes, as a relatively small difference in the number of students passing the bar has a greater impact on their overall passage rate.