U.S. Inequality Is Much Less When You Measure Spending Power (Including Government Transfer Payments) As Well As Income And Wealth

Differences in wealth and differences in income are the wrong ways to measure economic inequality, and going by either of them “dramatically overstates” the degree of inequality in the United States, a working paper argues.

The right measure of economic inequality is differences in spending power, says the paper U.S. Inequality and Fiscal Progressivity: An Intragenerational Accounting, which is by the economist Alan Auerbach of the University of California, Berkeley, the economist Laurence Kotlikoff of Boston University and the software developer Darryl Koehler of Economic Security Planning.

Spending power — the amount of goods and services that a person can buy — is what really matters to people because it captures the ability to satisfy their wants and needs, Auerbach, an expert on the economics of public finance, told me. He asked me to imagine bars of gold encased in a radioactive block. If wealth can’t be used, it’s of no value. The same goes for income, he said.

Study after study has shown rising inequality of income and wealth in the United States. An article by the economists Thomas Piketty, Emmanuel Saez and Gabriel Zucman published in 2017 found that the average real income of the top 0.1 percent of the population grew by 298 percent between 1984 and 2014, while the average real income of the bottom half of the population grew just 21 percent. 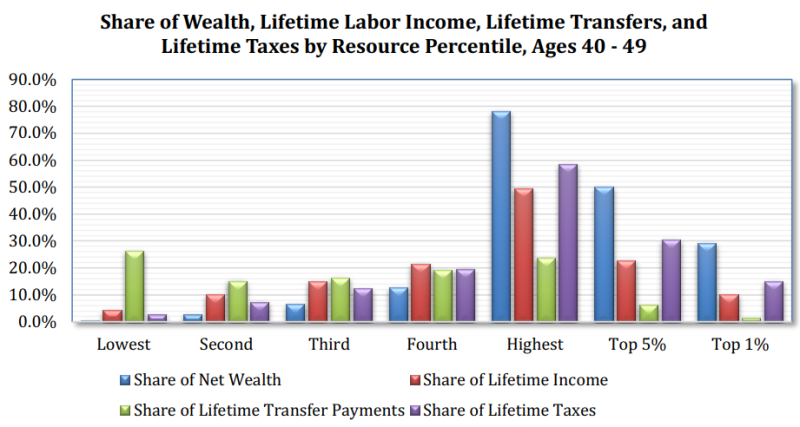 Difference in wealth overstates inequality because it fails to capture two of the main enablers of spending power, namely earnings from work and government benefits, the paper says. Someone who has no money in the bank can still have a relatively decent lifestyle based on salary and various transfer payments, including Social Security.

Economic inequality is fundamentally about differences in spending power, i.e., the ability to engage in current and future consumption. The literature, though, has focused largely on wealth and income inequality, both of which can differ markedly from spending power-inequality due to government redistribution. This study measures inequality in spending power within specific age cohorts, holding constant household behavior. Segregating by cohort controls for growth and life-cycle effects, while assuming uniform household behavior controls for endogenous responses to the tax-transfer system as well as differences in preferences. We also study fiscal progressivity via a new measure—the lifetime net tax rate. We calculate spending power by running the 2016 Survey of Consumer Finances data plus imputed variables through the Fiscal Analyzer (TFA), a life-cycle, consumption-smoothing program that includes hard borrowing constraints and all major federal and state tax/transfer programs, whether cash or in-kind. Our findings are striking.

Second, inequality in current-spending-power (CSP)—spending in the current year arising under the household’s possibly constrained consumptionsmoothing plan—differs from LSP, sometimes importantly, due to credit constraints, in-kind government benefits, and other factors.

Third, the U.S. fiscal system is highly progressive once cohorts are old enough to have highly dispersed human wealth. Consider the bottom quintile of 40-49 year-olds. Their lifetime net tax rate (lifetime net taxes divided by lifetime resources) is substantially negative, -44.4 percent, while that of the top 1 percent in the same cohort is 34.7.

Fourth, households’ rankings based on current income can differ substantially from their ranking based on lifetime resources.