NALP: 82% Of Attorneys Are Satisfied With Their Legal Careers Three Years After Graduating From Law School

The NALP Foundation and NALP Release Joint Study of U.S. Law School Alumni Employment and Satisfaction for the Class of 2018: 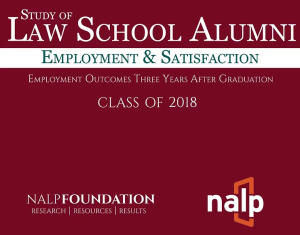 The NALP Foundation and NALP today released their ninth joint study, Law School Alumni Employment and Satisfaction, for the Class of 2018. The new data shows intriguing shifts within graduates three years after graduation, including:

About 82% of attorneys reported that they are satisfied with their overall legal careers three years after they graduated from law school, a tick down from last year's finding of 85%, according to a report released Monday from the National Association for Law Placement.