After The SCOTUS School Prayer Decision, What Comes Next For American Jews?

Forward Op-Ed:  After the SCOTUS School Prayer Decision, What Comes Next For American Jews?, by Michael Helfand (Pepperdine): 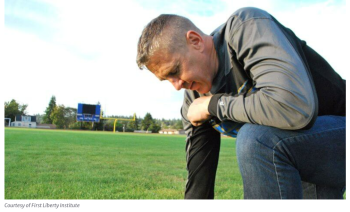 The Supreme Court issued yet another landmark church-state decision on Monday, finding in favor of Coach Joseph Kennedy — a public high school football coach — who had been terminated for praying at the 50-yard line after games.

The case presented not only a convoluted record of when and with whom these prayers took place, but also hinged upon issues of religious liberty, church-state separation and free speech—and has therefore become somewhat of a Rorschach test. To some, the case was all about a coach losing his job for a personal prayer; to others, the case was all about a school district preventing a school employee from indoctrinating students.

Ultimately, the Court’s decision has the potential to protect individual religious liberty while still protecting public school students from religious coercion. Only time will tell whether lower courts will successfully walk that line.

Much of the controversy surrounding the opinion draws from disputes regarding the factual record. ... The extensive debate over the underlying facts is a reminder why the Supreme Court typically takes cases with a clearly developed factual record. The clash over who participated in which prayer has generated more finger-pointing than illumination. But, for a Jewish community deeply concerned both about coercion at the hands of a religious majority and about religious freedom to engage in often unpopular religious practices, where does this leave us?

Prohibiting government endorsement of religion provides important protections, especially for a religious minority like the Jewish community, and especially in the context of public schools. Now, when evaluating potential violations of church-state separation, the Court will focus not on perceptions of endorsement, but more narrowly on whether the government is coercing religious conduct.

If those protections are to be adequate for American Jews, the Court will likely need to have a wide view of what constitutes coercion—a particularly thorny concept in the context of public education. In turn, lower courts will need to police government institutions for subtle and informal methods of coercion.

At the same time, it is important not to lose sight of how the Court’s decision provides important protections with respect to religious liberty. If the government could recharacterize private religious exercise as the conduct of the state—and then prohibit it as an unconstitutional merger of church and state—then religious government employees, and in particular those of minority faiths, could all-too easily have their religious activity suppressed.

Yesterday’s opinion, in surgically carving a private space for Coach Kennedy—amid the chaos of a high school football game—certainly provided guidelines that will protect Jewish government employees in environments that might be less than hospitable to their religious practices.

All told, the regime ushered in by the Court’s decision provides a framework capable of ensuring that all citizens—whether government employees or public-school students—remain both free to exercise their faith and free from religious coercion. It will be up to lower courts, implementing this framework in the coming years, to fulfill that promise.