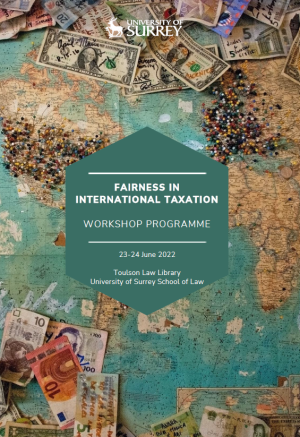 Fairness in International Taxation brings together legal scholars, political theorists and political philosophers to consider both high-level theories of distributive justice and the normative underpinnings and implications of leading policy proposals. The workshop will cover questions such as how to divide tax revenue from multinationals between nations, how to strike a fair balance between combating profiting shifting and respecting national autonomy, and how to tax internationally mobile workers. By combining theoretical approaches to distributive justice with analysis of the political and institutional context of policymaking we aim to develop new accounts of fairness in international taxation.

How to ensure that multinational companies are paying their “fair share” of taxes in the countries in which they create value has been the subject of lively debate within the international tax community in recent years. These debates have led to significant and exciting reforms, namely the OECD/G20 Inclusive Framework. While these reforms represent an important step towards creating a more coherent and equitable international tax system, the current conversations have overlooked an essential fact. Value created by a company’s business activities manifests itself in two ways—as business income and as an increase in the overall market value of the company, which then translates into capital gains income when investors sell their shares. Thus far, the conversation has focused exclusively on how to divide taxing authority over company income, missing half the story. A truly comprehensive reform that ensures fairness and equity in international taxation must address the question of how taxing authority over income stemming from the growth in company value should be allocated amongst countries.

This paper fills this gap and assesses how taxing authority over this capital gains income should be divided amongst countries under the normative principles that have guided international tax law for the past 100 years.

Scholars have neglected individualist approaches to the international allocation of taxing rights because of a perceived philosophical problem. Many tax scholars believe that only two kinds of individualism are coherent. The first urges us to treat the world as though it were one society; the second urges us to ignore the interests of foreigners entirely. Since each of these positions is implausibly extreme, individualism has not caught on.

In this article, I develop a moderate individualist approach to the international allocation of taxing rights.

A prominent theme in the discourse of international taxation is that taxing rights should follow wealth production. Examples of current attempts to implement such a proposition include the OECD’s BEPS project and the frequently heard calls to adopt some form of international formulary apportionment. In considering the validity of this proposition, the Article will rely on the familiar dichotomy in moral philosophy between the right and the good. In the context of international taxation, the right involves a host country’s deontological claim to receive a portion of the income produced within its borders. The good involves the claim that host countries need revenue from multinational enterprises (MNEs) to fund public goods. Although the literature often conflates these two claims, they are distinct and require separate analysis.

Under the guise of compelling multinational enterprises (MNEs) to pay their fair share of income taxes, the OECD and other multinational agencies introduced proposals to prevent MNEs from eroding the income tax base of developed economies by continuing to shift income artificially to low or zero tax jurisdictions. Some of the proposals garnered substantial multinational support, most recently adopted by 136 (7) OECD countries, including recent support from the U.S. presidential administration for a global minimum tax. This Article reviews many of those international proposals.