Shaviro: Bonfires Of The American Dream In American Rhetoric, Literature And Film 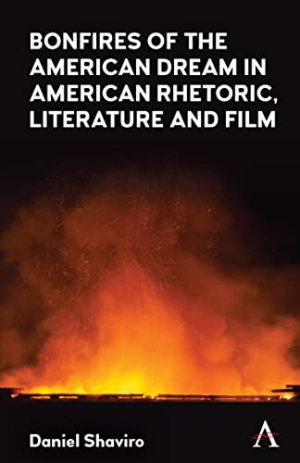 How could American social solidarity have so collapsed that we cannot even cooperate in fighting a pandemic? One problem lies in how our values mutate and intersect in an era of runaway high-end inequality and evaporating upward mobility. Under such conditions, tensions rise between our egalitarian and democratic traditions on the one hand, and what we often call the “American Dream” of self-advancement and due reward on the other.

In our current Second Gilded Age, as in the first one from the late nineteenth century, the results of economic competition appear to suggest, falsely, that some of us are “winners” who deserve everything they have, while others are contemptible “losers.” The rich ostensibly owe the poor nothing — not even compassion or respect, and certainly not material aid through government.

In Bonfires of the American Dream, Daniel Shaviro develops these themes through close studies, in social context, of such classic novels and films as Atlas Shrugged, The Great Gatsby, It’s a Wonderful Life, and The Wolf of Wall Street. He thereby helps to provide a better understanding of what, apart from racism, has in recent years caused things to go so wrong culturally in America.

“This is a wonderful book, a page-turner about popular American thinking about the American Dream. Shaviro shows how much of our cultural experience consists of economic fantasies, and how much in turn those fantasies shape our culture and our politics. Brilliant, accurate, surprising, and unfailingly interesting.” — William Flesch, Professor of English, Brandeis University, USA.

“These readings of film and literature are subtle, convincing, and fascinating. Further, since they are written in short sentences, in plain yet lively prose, with carefully explicit conclusions, they are wholly accessible to the lay reader. Their theme is of exceptional interest to us all, in our anxious perception that American democratic values may be on course for disintegration.” — Professor Chris Fitter, Department of English and Communication, Rutgers University, USA.

“A selective but fascinating tour of American popular culture (Atlas Shrugged, The Great Gatsby, It’s a Wonderful Life, The Wolf of Wall Street) that illuminates destructive discrepancies between American ideals and practices and bitter divisions between rival ideals since the founding. One wonders how America has survived—and if it should.” — Professor Steven Johnston, Political Science Department, The University of Utah, Salt Lake City, USA.