The blog will conclude with some reflections on possible reasons for the jump in enrollment and LSAT profile in fall 2021 and some thoughts on the decline in applicants for this fall (and what that might mean for enrollment). 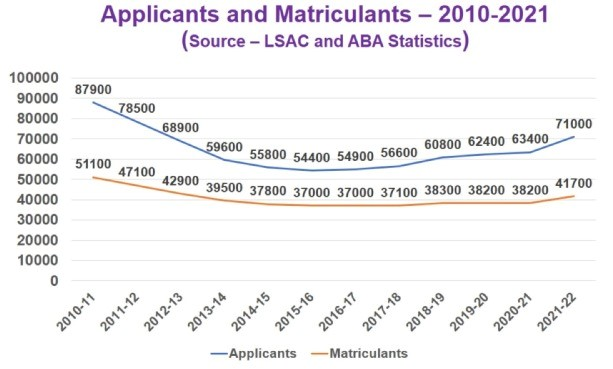 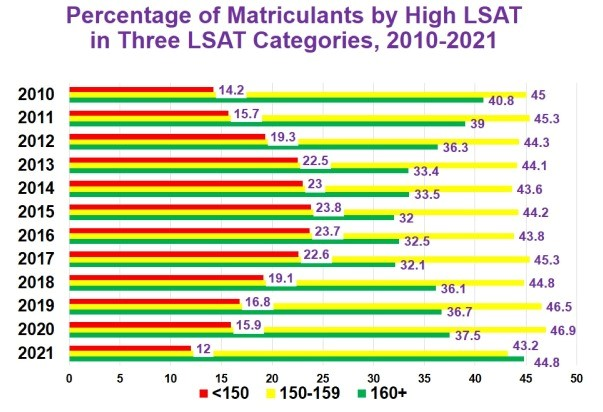 When the categories of matriculants are disaggregated further into five LSAT categories, these changes become even more manifest. 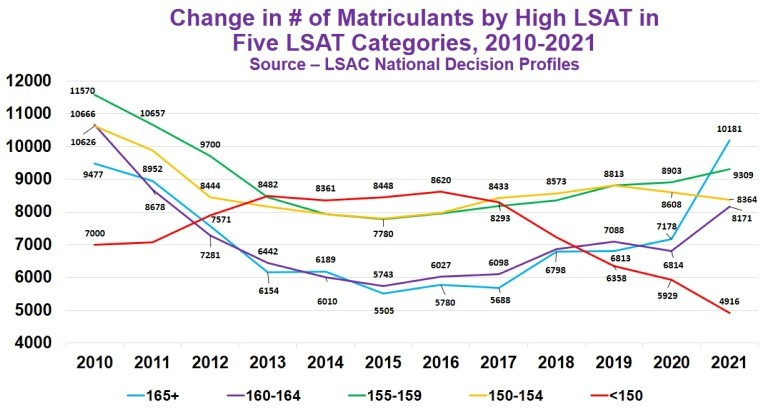 Perhaps the most startling thing about the fall 2021 data is that for the first time, the 165+ category, which had never been more than the third largest category, became the largest category, increasing from roughly 7,100 in fall 2020 to nearly 10,200 in fall 2021, representing an increase of roughly 44% and representing the largest number in the 165+ category over this entire 12-year period.

One interesting aspect of Chart 3 is the extent to which the two sets of LSAT categories track each other closely throughout most of the period shown in the chart.  The 150-154 category and the 155-159 category follow a similar downward trend until 2013 and then from 2013 to 2020 are on virtually an identical track separated by no more than 300 and sometimes 25 or fewer.  Then between 2020 and 2021 the gap becomes nearly 1,000, the largest since 2012.

At that point, the ABA Section for Legal Education and Admissions to the Bar took its accreditation responsibilities seriously and began investigating and sanctioning law schools that were admitting/matriculating too many students with really low LSAT scores and not providing a sufficiently robust program of legal education to help them successfully pass the bar exam. As this effort began to take hold during the 2017 admissions cycle, the data show a decline in the number of matriculants with an LSAT of less than 150 -- a decline that has continued every year since. This ongoing decline has been driven partly by the closure of some law schools (Charlotte, Arizona Summit and Florida Coastal) while others have relinquished accreditation from the ABA (Thomas Jefferson). (For example, just across these four law schools there were roughly 700 matriculants in fall 2015 with LSATs of less than 145.)  Others, either on their own or in response to ABA investigations, have adjusted their admissions efforts, focusing on admitting fewer students overall with a larger percentage having stronger LSAT/GPA profiles. By fall 2020, the number of matriculants with an LSAT less than 145 had declined from its peak of slightly over 3,000 to roughly 1,100.

I think the jump in applicants/matriculants in fall 2021 is due to two factors – the impact of the Covid-19 Pandemic and the LSAT “Flex”.

The Covid-19 Pandemic began two years ago in March 2020, when the fall 2020 admissions cycle was starting to wind down.  While the 2020 cycle overall saw a slight increase in applicants compared to the 2019 cycle, the number of matriculants ended up being flat compared to fall 2019. I think that given the financial uncertainties associated with the Covid-19 Pandemic and the uncertainties about whether legal education would be in-person or online, a number of potential applicants decided to wait until the fall 2021 admissions cycle while a number of potential matriculants (those who already had been admitted for fall 2020) likewise made the decision not to enroll in fall 2020 and either defer enrollment until fall 2021 or simply reapply in the fall 2021 cycle.

Perhaps most instructive is what has happened in the current admissions cycle with the discontinuance of the LSAT “Flex” and the shift to the LSAT-4. Beginning with the introduction of the LSAT-4 in August 2021, my understanding is that the average LSAT score for every administration is lower than the comparable LSAT “Flex” administration in the preceding admissions cycle, even though applicants are still taking the exam in the comfort of their home rather than at a test center.

What this means for enrollment in fall 2022 remains to be seen, but with so many law schools having increased their LSAT medians in fall 2021 (165 out of 193), it likely means a modest reduction in first-year enrollment in fall 2022.  In our analysis of law schools navigating the decline in applicants from 2010-2016, Competitive Coping Strategies in the American Legal Academy: An Empirical Study, my coauthors, Bernie Burk, Emma Rasiel and I found that most law schools preferred to maintain profile over revenue in the midst of a decline in applications.  Accordingly, I think fall 2022 enrollment will be down from fall 2021 (41,700) but still above where it was in fall 2020 (38,200), perhaps somewhere right around 40,000.