Kay Bell (Don't Mess With Taxes), Juneteenth: A Time to Celebrate and Move Forward, Including Within the Tax Code: 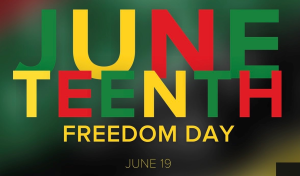 It's the second year of Juneteenth being celebrated as a federal holiday. Since today is Sunday, federal offices will observe it on Monday, June 20. ...

Now national, but not recognized in all states:  While Texas' continued enslavement of its Black residents was the awful reason for the order, at least my home state was the first to make Juneteenth an official state holiday. That happened in 1980. However, federal June 19 action notwithstanding, today isn't recognized as a legal holiday in most states.

The Pew Charitable Trusts story on Juneteenth and where it is and isn't celebrated at the state level earns the ol' blog's first Sunday Shout Out. ...

The tax law’s race-blind approach produces bad tax policy. This essay uses three very different examples to show how failing to openly and honestly address race generates bias, and how devasting the results can be. Ignoring race does not solve problems; it creates them. ProPublica has shown, for example, that because of the perils of filing income taxes while Black, the five most heavily audited counties in the United States are Black and poor.

The racial bias long tolerated—and sometimes exploited—by tax scholars and policymakers affects all aspects of the tax law. In 1986, Sam Gilliam was denied tax deductions that others in similar situations enjoyed. In 2000, Liberia was threatened with sanctions for being a tax haven, but Switzerland was not. In 2014, Eric Garner died in police custody after being suspected of evading a tax. In each instance, anti-Blackness played a role in ways the tax law either ignores or actively leverages.

Dean's study also points to examples of how tax law racial bias has long been tolerated and exploited, sometimes with tragic, deadly ends.

Far from being somehow at odds with July 4 and the Declaration of Independence, Juneteenth celebrates the greatest achievement of the principles of the Revolution.