The Harvard Law Review administers the Bluebook and manages its distribution. For its work, the HLR receives a 8.5% cut of the Bluebook’s net profits as “administrative fees.” (Historically it has been higher, and prior to a 1974 revolt by the other law reviews Harvard took all the money.) After the HLR takes its administrative fees, the remaining profits are distributed equally among all four law reviews. 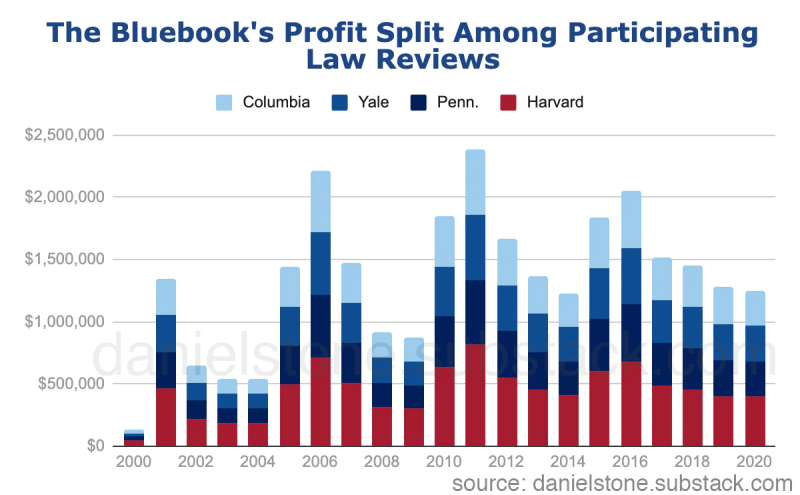 Conclusions
The Bluebook has been profitable for the law reviews that own it in the last two decades. The fact that most new law students get a copy and large numbers of legal professionals will always buy the latest edition ensures that it will keep bringing in money. However, while sizable, the Bluebook’s profits are actually not stratospheric, especially considering what other textbooks make.

The clearer issue seems to be that it doesn’t look good—that there is the appearance of impropriety, to use a term that may be more familiar to readers. To an outsider it might seem that elite students are living well because they happened to inherit the IP of a widely mandated text, that there is indeed something slightly dirty about the business of making money off fellow and often much less privileged students at other schools. It much more likely that slight embarrassment about the windfall occasioned by this lucky circumstance rather than actual impropriety has led the law reviews to be so guarded about the numbers presented above. But on balance, it is unlikely it would change much if the law reviews simply published the numbers themselves.