I write to update you on the matter involving Ilya Shapiro and actions I have taken.

In late January, several days before Mr. Shapiro was due to join the Georgetown Law staff as Executive Director of the Center for the Constitution, he tweeted that, although President Biden should nominate Judge Srinivasan for the Supreme Court, the President would instead nominate a “lesser Black woman.” His tweets could be reasonably understood, and were in fact understood by many, to disparage any Black woman the President might nominate.

As I wrote at the time, Mr. Shapiro’s tweets are antithetical to the work that we do at Georgetown Law to build inclusion, belonging, and respect for diversity. They have been harmful to many in the Georgetown Law community and beyond.

I was also concerned that Mr. Shapiro’s tweets could undermine his ability to be an effective administrator as Executive Director of the Center for the Constitution. I helped Professor Randy Barnett, the Center’s Faculty Director, launch the Center ten years ago in large part because I wanted to support ideological diversity and encourage rigorous discussion about constitutional originalism among people with a range of perspectives. The Center has been a great success. A diverse group of academics from a wide range of backgrounds across the political spectrum have participated in its programs. Mr. Shapiro’s tweets, however, have for some raised questions about the Center’s ability to continue its important work and to be a place welcoming to people regardless of their race, sex, or gender. As a result, I also asked the Office of Human Resources (HR), which oversees the University’s staff policies on professionalism, to investigate whether Mr. Shapiro’s tweets violated the University’s staff policies on professional conduct.

I placed Mr. Shapiro on paid administrative leave pending the outcome of the IDEAA and HR investigations. He was notified of the issues being investigated and given an opportunity to participate in writing and in person, and he took advantage of that opportunity.

IDEAA and HR have now completed their investigations, and I received their reports this morning. As Mr. Shapiro posted the tweets on January 26, 2022, but his employment did not start until February 1, 2022, IDEAA and HR concluded that Mr. Shapiro was not a Georgetown employee at the time of his tweets. As such, he was not properly subject to discipline for them. As a result, he can begin his work as Executive Director and he will, subject to the Law Center’s normal Office of Academic Affairs processes, be able to teach upper-class elective courses as a senior lecturer. At the same time, IDEAA and HR found that Mr. Shapiro’s tweets had a significant negative impact on the Georgetown Law community, including current and prospective students, alumni, staff, and faculty, and they recommended that I put in place actions to address the negative impact that the tweets had on the law school community.

I share this concern about the impact of Mr. Shapiro’s tweets on our community and on our efforts to build a culture of equity and inclusion at Georgetown Law and am following up on the recommendations of IDEAA and HR. I have met with Mr. Shapiro to discuss the tweets, which he had already acknowledged were “recklessly framed” and “inartful” and for which he has apologized. I stressed to Mr. Shapiro that, although he has every right to express his views, I expect him, as a staff member at the Law Center, to communicate in a professional manner. I requested he consult with his faculty supervisor at the Center for the Constitution, Professor Barnett, on how to ensure that his future communications in his capacity as a Law Center staff member are professional and comply with our University policies. Mr. Shapiro will also participate in programming on implicit bias, cultural competence, and non-discrimination, which the Law Center is requiring senior staff to attend. Finally, I expressed my concern that his tweets would potentially have the effect of making some students feel unwelcome in any elective course he might teach. To that end, I have asked him to make himself available to meet with student leaders concerned about his ability to treat students fairly.

I am deeply aware of the pain this incident has given rise to in our campus community, particularly but not exclusively among our Black female students, faculty, staff, and alumni. I am thankful for the involvement and commitment of so many. I know that there will be a range of feelings and concerns about this resolution, and I am respectful of those differences.

In his offer letter, we invited Mr. Shapiro, as we do all staff, to “learn more about the rich traditions embodied in the Mission of the University: our belief that diversity promotes understanding, our intellectual openness, our international character and our commitment to the principles of lifelong self-reflective learning, responsible community membership, the common good and generous service to others.” These are principles we should all embrace, and it is my hope that Mr. Shapiro will embrace them as he joins our staff.

Georgetown Law is committed to preserving and protecting the right of free and open inquiry, deliberation, and debate. We have an equally compelling obligation to foster a campus community that is free from bias, and in which every member is treated with respect and courtesy. I am committed to continuing to strive toward both of these indispensable goals.

Wall Street Journal Op-Ed:  My Cancel-Culture Nightmare Is Over, by Illya Shapiro:

My long public nightmare is over. Tomorrow I assume my duties as a senior lecturer at Georgetown University Law Center and executive director of its Center for the Constitution. ...

I’m relieved that now I’ll get to do the job for which I was hired in January. I’m confident that even without the jurisdictional technicality, I would’ve prevailed. After all, Georgetown’s Speech and Expression Policy provides that the “University is committed to free and open inquiry, deliberation and debate in all matters, and the untrammeled verbal and nonverbal expression of ideas.” There’s an exception for harassment, of course, but I wasn’t harassing anyone except possibly Mr. Biden. ...

Mr. Treanor also said that so long as I conduct myself professionally, he’ll have my back. I’ll hold both of us to both ends of that bargain. On my part, that means muting and blocking bad-faith Twitter antagonists—some of whom, I’m sorry to say, are in academia—and resisting the urge to correct all who are wrong on the internet. Not that bad tweets are firing offenses, but it would be good practice for all of us to stop late-night doom-scrolling and launching snarky ripostes to each latest inanity from our governing classes.

On Georgetown’s part, that means encouraging robust debate and being as committed to intellectual diversity as any other kind. Across the nation, campus cultures have been growing increasingly hostile, with students outing each other (and professors) for ideological transgressions and self-censoring to avoid potential trouble. We have to reverse that trend.

It’s ironic that what got me adjudged a racist and misogynist by the illiberal mob was a tweet expressing opposition to hiring people based on race and sex. Regardless, all are invited to my Georgetown events. It’s a new day.

National Review, Ilya Shapiro’s Reinstatement Is a Win for the Political Power of Free Speech, But a Loss for the Value of Academic Freedom:

There are two ways to look at Georgetown University Law Center’s decision to reinstate Ilya Shapiro after a five-month investigation into a tweet. On the upside, Shapiro was not fired, and he will begin teaching at the law school, a visible symbol of vindication over cancel culture. That is a win for the good guys in terms of raw power: Georgetown clearly signaled, in its statement, that the dean would have preferred to fire him — whether due to the dean’s own animus or terror of his woke students — but did not feel at liberty to do so given the extensive publicity and the forces rallying to Shapiro’s defense. Thus, he was grudgingly retained with some excuses about technicalities (his tweet preceded his start date) and allowed to return — only after students are off campus for the summer. The cowardly timing suggests that the dean is hoping the whole thing goes away by the fall. ...

The bad news: This was a win for outside pressure, not for internal reform. The law school’s statement validating the mob’s whining contains obvious warnings that political statements disliked by left-leaning students or administrators will be a firing offense. There is not a shred of acknowledgement that academic freedom is actually valued by the law school. The process — 122 days in limbo — was punishment in itself. The message here is clear: Stay in line, or you will go through the same thing — and if you’re not as prominent and respected as Ilya Shapiro, and supported with as much vigor by enough friends of free speech, you may not survive as he did.

The incident reflects the pressure on administrators nationwide to showcase their schools as sites of diverse viewpoints while also ensuring students feel safe and welcome. Georgetown Law has not yet reached a balance, said Amber Freeney, a third-year student and president of the campus’s Black Law Students Association.

Freeney said the university’s investigators should publicly release their findings into the Shapiro tweets. “I’m outraged,” Freeney said. “I believe in freedom of speech, but I do not believe in freedom from consequences. I feel like Georgetown University Law Center has failed to recognize the difference.” 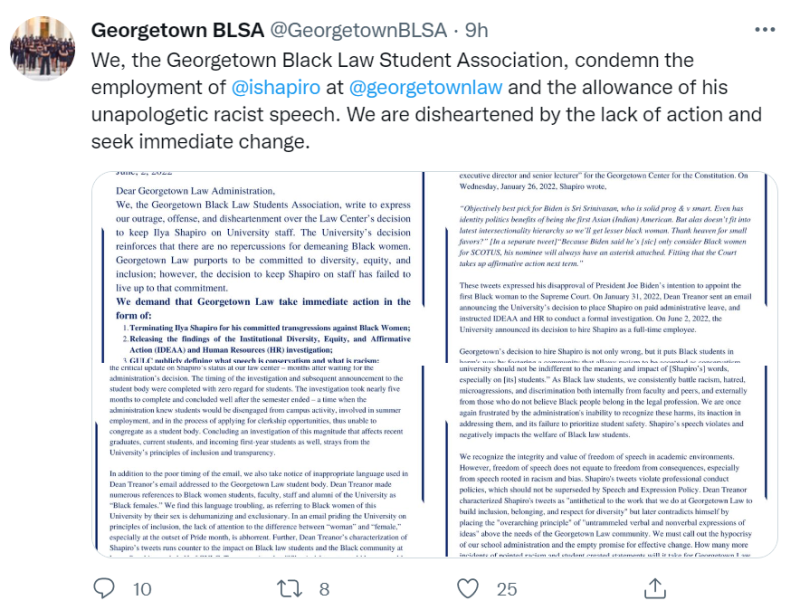