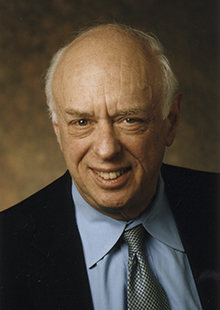 “John Simon was a beloved teacher, colleague, and friend,” said Dean Heather K. Gerken. “His devotion to the School was unparalleled, he pioneered the study of nonprofits and philanthropy, and he shaped the careers of generations of students. We have lost a giant, and we mourn his loss throughout our community.”

Born Sept. 19, 1928, Simon graduated from Harvard College, where he was the president of the Harvard Crimson, before earning his law degree from Yale Law School in 1953. After law school, Simon served in both military and civilian capacities in the Office of General Counsel, Office of the Secretary of the Army, and practiced law in New York with the firm of Paul, Weiss, Rifkind, Wharton & Garrison from 1958 to 1962.

Simon joined the Yale Law School faculty in 1962, specializing in teaching and research related to the nonprofit sector and philanthropy, as well as elementary and secondary school education. He also taught courses in contracts, aging and the law, and family law. Simon served as Deputy Dean from 1985–1990, and Acting Dean in 1991.

In 1977, he founded the Yale Program on Nonprofit Organizations, one of the first university-based nonprofit research centers, which considered the past, present, and potential roles of nonprofits, along with issues surrounding their control, governance, and financing. In 1989, Simon received an honorary doctor of laws degree from Indiana University for his contributions to scholarship in philanthropy. ...

“John Simon was a great scholar,” said John A. Garver Professor of Jurisprudence William Eskridge ’78. “He founded an area of legal scholarship and pedagogy and then starred in the field he created. Inspired by his classes and his ideas, hundreds of Yale graduates worked in that field of law. In his prime, which lasted for decades, he supervised more student Supervised Analytic Writing projects than anyone else on the faculty, and he carried this heavy load cheerfully and helpfully. He carried the same good will and good sense into faculty meetings and mentorship of his younger colleagues.” ...

Simon is survived by his wife Claire.