WSJ Book Review: America's Book — The Rise and Decline Of A Bible Civilization 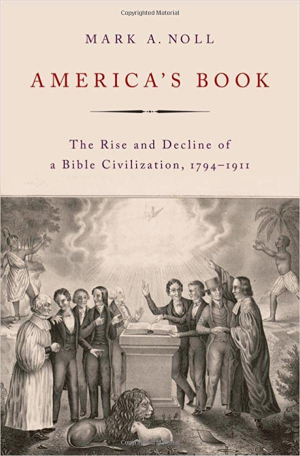 Many Americans born after 1960 have trouble imagining that for much of the country’s history the Bible was a chief source of national identity. ... Whether ceremonial or therapeutic, Bible-reading in public schools was, by the 1950s, among the last uncontested conventions of America’s Bible civilization.

Mark Noll’s Mark A. Noll (Notre Dame), America's Book: The Rise and Decline of a Bible Civilization, 1794-1911 explains how the Bible achieved this status. The new nation’s rejection of European forms of Christendom such as sacral monarchy and state churches left the Bible to bear the burden of America’s attempt to create a Christian civilization. A completely secular republic was never a possibility except for the most free-thinking of free thinkers. The Founders virtually to a man insisted that a republic depended on a virtuous citizenry, and that the best source of morality was religion. Despite the variety of Protestant denominations, church leaders and public officials agreed that the Bible was the best and most reliable guide for determining moral consensus.

“America’s Book” documents the extent of the Bible’s reach—from the printing and distribution of Bibles and the creation of Sunday schools to the intellectual dead ends into which unwise handlers of the Bible were led. The book’s breadth is a tribute to Mr. Noll’s career as an interpreter of Protestantism in North America, even if its encyclopedic quantity occasionally obscures the overarching argument. ...

Since Mr. Noll’s book ends with the tercentenary of the King James Bible in 1911, “America’s Bible” offers little help in understanding why the vilification of political foes has increased even after America’s Bible civilization has lost its grip. Perhaps the Puritan mind, once installed as the nation’s operating system, makes it harder to load new moral apps. Whatever the explanation for both the left’s and the right’s ongoing moralization of policy and law, Mr. Noll’s book is a valuable reminder that conceiving America in Christian categories is not a product of the 2016 election.