New York Times Op-Ed:  When Your Job Fills In for Your Faith, That’s a Problem, by Sean Dong (UC-Berkeley; Co-Director, Berkeley Center for the Study of Religion; Co-Author, Work, Pray, Code: When Work Becomes Religion in Silicon Valley (2022)) 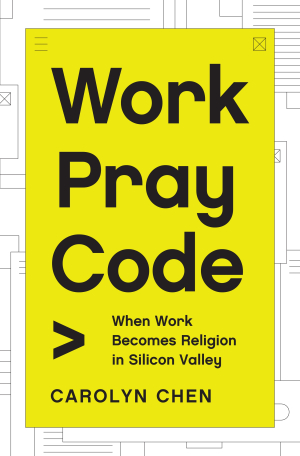 Plenty of writers have argued in recent years that work has become a false idol, with the office, not church, the place where many Americans now seek out meaning and purpose. As a sociologist of religion, I think these writers are right: Work is replacing — and in some cases, even taking the form of — religion among many of America’s professionals.

Between 2013 and 2018, I conducted over 100 interviews for my book “Work Pray Code.” Most of them were with tech workers based in Silicon Valley, people who told me over and over that their careers are “spiritual journeys” and their work is a “calling.” Many said they had become more spiritual, whole and connected after working in tech. Their workplaces were communities where they found belonging, meaning and purpose.

But as I discovered during my research, the gospel of work is thin gruel, an ethically empty solution to meet our essential need for belonging and meaning. And it is starving us as individuals and communities. ...

Worshiping work costs the rest of us, too. Today the theocracy of work increasingly governs life in other knowledge-industry hubs across America like Seattle, New York and Cambridge, Mass. It is hollowing out our faith communities and civic associations — the places where diverse groups of people hash out hard questions of moral value, the very questions that [people are] so hungry to engage with.

Across different faith traditions, clergy members in Silicon Valley say that their congregations are dwindling because people are too busy working. A few decades ago, a pastor told me, the typical member attended Sunday service and Sunday school most weeks. Today that member attends only Sunday service once a month, he said. And he is scraping for volunteers as never before.

Worshiping work is also weakening our democracy, as well-paid professionals — historically among the most politically engaged demographics in America — check out politically. ...

[N]ot everyone gets pulled into the religion of work. As I conducted my research, I discovered that certain groups of people are less likely to worship work — including older tech workers and devoutly religious tech workers of all ages. Whether it is at a local Buddhist temple, a church or a political association, these tech workers belong to communities outside work that lay claim to their time, energy and devotion. Tech workers who are religious stand out even more from the work-worshiping mainstream. Their religions give them a solid foundation to build a sense of self, community, spirituality and purpose apart from work. And their religious communities are often more diverse, both racially and socioeconomically, than the ones they find at work.

If we don’t want a country where people worship work, we must protect and strengthen our unions, our neighborhoods, our political groups and our mosques, churches, synagogues and temples. These civic institutions are the building blocks to creating a society where there can be more to life than work.