Who Gives A Trump? Evidence Of Framing Effects In Tax Policy 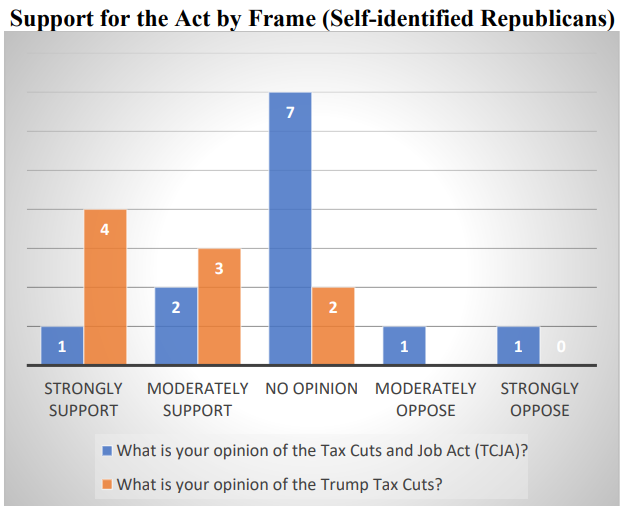 Conclusion
Presidents promote the economic impacts of their policies and legislation in efforts to positively sway the opinions of the electorate (De Boef & Kellstedt, 2004; Chong and Druckman, 2007). Tax policy, in particular, is thought to be an issue that can drive Presidential Election Cycles (Strum, 2013) wherein decisions regarding its framing can significantly influence public opinion and, consequently, election results. There is a dearth of research, however, that investigates the framing effects of tax plans on the public’s perceptions and approval of those schemes.

Polling indicates that associating the name of a United States President with a particular policy or article of legislation, an attribute framing effect, influences the perceptions of respondents (e.g., Cox & Jones, 2015; Schwartz, 2016). Furthermore, research suggests that that an individual’s political party affiliation serves as a heuristic in formulating attitudes towards policies (Cohen, 2003; Layman and Carsey, 2002; Rahn, 1993). As such, separating issues or, rather, the perceptions of issues, from party affiliation becomes challenging (Barber and Pope, 2018). Thus, the purpose of this manuscript was to examine the differential effects of policy framing between those that identify as Republicans and non-Republications.

A framed survey was employed to measure how associating the name “Trump” with the Tax Cuts and Jobs Act (TCJA) affected an individual’s support of that act. Participants recruited from a Volunteer Income Tax Assistants (VITA) program were asked to provide data regarding political affiliation and attitudes toward the TCJA prior to having tax returns completed. The results indicate that support of the Act increased among those who self-identify as Republican when the legislation was referred to as the “Trump Tax Cuts” (as opposed to the Tax Cuts and Jobs Act). For people with who do not self-identify as Republican, association with the name “Trump” did not precipitate stronger or weaker support of the Act.