Demographic disparities in bar exam pass rates are problematic but poorly understood. We investigate a possible explanation: participation in extracurricular activities, which could either distract from bar exam preparation or motivate and prepare students to succeed. Generally, participation in extracurricular activities while in law school does not play a large role in bar exam success. However, there is a significant, arguably causal, penalty associated with one particular activity—pro bono work—most notably in lower-ranked law schools. This penalty is sizable: pro bono work is associated with a 5 percentage point (6%) decrease in the chances of passing the bar exam on the first attempt. This penalty is largest for Black and female students and may explain as much as 20% of the Black-white gap in first-attempt bar pass rates. 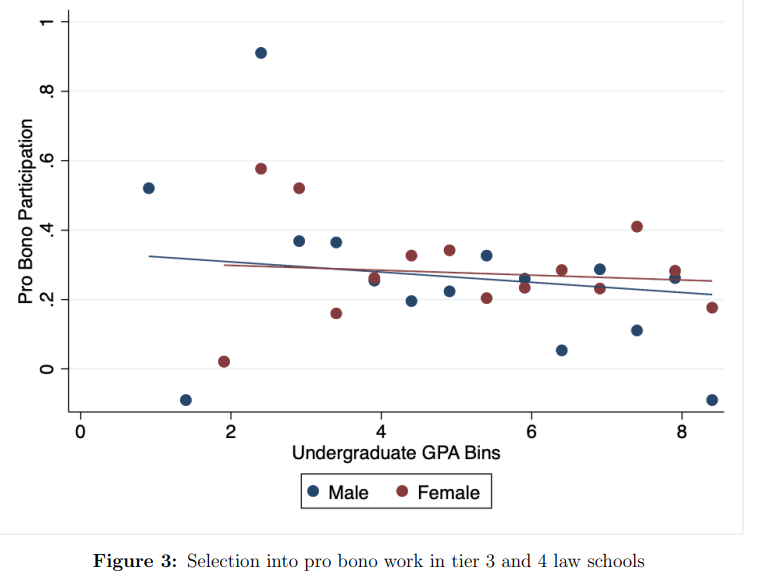 Conclusion
This study uses nationally representative data from the After the JD (AJD) dataset to investigate the effect of participation in extracurricular activities (ECA) while in law school on first-time Bar exam takers’ success rates. By and large, we find little evidence that ECA play a key role in influencing bar exam success or in explaining demographic disparities in bar pass rates. However, there is one notable exception: participation in pro bono work while in law school, particularly for students in Tier 3 and Tier 4 law schools, significantly hinders bar exam success. Specifically, we find that in these lower-ranked law schools participation in pro bono work during law school reduces the chances of passing the bar exam on the first attempt by about five percentage points, or 6%. This is a conservative, arguably causal estimate that, if anything, might understate the penalty associated with pro bono work. This penalty is about twice as large for women and Black students and could explain as much as 20% of the racial gap and 6% of the gender gap in bar success rates.

We cannot say why exactly these penalties occur or why they are larger for certain groups of students. A likely reason is that the work done in pro bono positions is not directly relevant to bar exam preparation and, moreover, may displace time and energy from bar exam preparation. As for the heterogeneous effects, it could be that women and Black students engage in different types or intensities of pro bono work; unfortunately, all we observe in the AJD is a simple binary indicator for pro bono participation. Future research should investigate the channels through which these penalties operate.

Nonetheless, these results suggest that a cultural and institutional norm in many law schools and legal communities–students’ participation in pro bono legal work–might hinder diversity and inclusion efforts in the legal field. This is a delicate issue, as the American Bar Association (ABA) itself requires that law schools provide pro bono work opportunities to students, and the culture and expectation of lawyers performing pro bono work for the public good and for those who cannot afford legal representation is a noble, defining trait of the profession. At the very least, it is imperative that law school faculty, mentors, and advisors have candid discussions with students who are (or who are considering) performing pro bono work while in law school about the potential trade-offs associated with such work. This is particularly true for the students most at risk of experiencing the pro bono penalty: students in lower-ranked schools and Black and female students. Even the most altruistic student must realize that they can do more good over the course of a long career than during their time as a student, and if ensuring that they pass the bar exam and get to experience that long career requires foregoing some pro bono work early on, so be it.