I compare the link between tax rates and team winning percentage before and after the introduction of free agency in each league using within-team variation in top state marginal income tax rates. Prior to free agency, there was a small positive association between income tax rates and winning. After the introduction of free agency, changes in state income tax rates significantly influence team performance. Each percentage point increase in the top marginal income tax rate is associated with a 0.70 percentage point decrease in win percentage. The tax rate effect on team performance is robust to a variety of specifications, such as controlling for sales and property taxes or alternative tax rate measures. Changing the outcome measure to be championships or finals appearances also yields similar results. The estimated effect size is non-trivial. The main analysis effect size of − 0.70 means that a one standard deviation increase in tax rate will result in 2.05 fewer wins over an 82 game season. …Figure 3 presents the annual point estimates  and 95% confidence intervals of the income tax rate effects between 1980 and 2017. … [I]n all 9 years prior to any league having free agency, there was a positive income tax effect estimate. This relationship changed shortly after the introduction of free agency and since 1990 the annual income tax effect has remained negative. 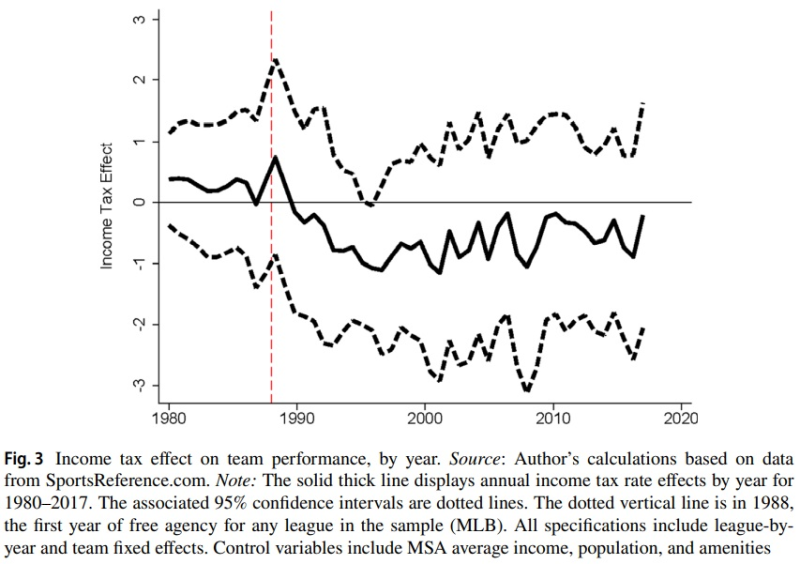 Dan Mitchell, If You Want Your Team to Win, Support Lower Taxes