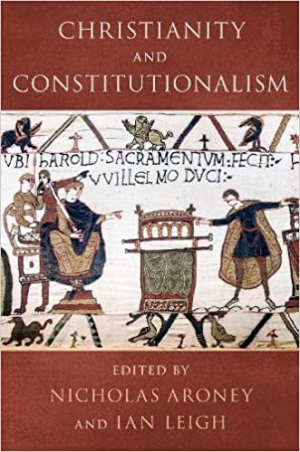 This paper, written for the forthcoming Oxford Handbook on Christianity and Law, edited by John Witte and Rafael Domingo, explores the influence of Christianity on constitutional law. The paper begins by pointing out that modern constitutional law is the product of several important historical influences. These include elements of Greek philosophy, Roman law, Christian theology, and Enlightenment principles. Greek philosophy proposed a classification of the basic types of constitution and introduced the idea of the rule of law. Roman law contributed the legal concept of jurisdiction, which is an essential feature of contemporary constitutional law. Christian theology offered a conceptual framework in which the authority of civil government was effectively qualified by a higher natural or divine law, and in which the spiritual authority of the church posed a practical limit on the temporal powers of the civil authority. Christian theology also provided the context in which the powers of civil and ecclesiastical rulers were tempered through various means, including the administration of oaths of office and the issuing of charters guaranteeing the rights of religious, social, economic, and civil associations of many kinds. The principle of the separation of powers and the establishment of written constitutions enforced by judicial review, although associated with the Enlightenment, also owed a great deal to these earlier principles and practices. The paper surveys the contribution of each of these influences and argues that although the Greek, Roman, and Enlightenment contributions have been important, constitutional law would not be what it is today if it were not for the influence of Christianity.