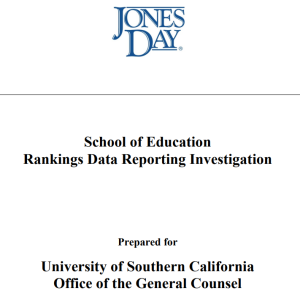 The former dean of the University of Southern California’s education school directed administrators to omit information from its U.S. News & World Report rankings submission to boost the school’s placement at least as far back as 2013, according to an investigation released Friday by the university.

Last month USC said it was pulling the Rossier School of Education from consideration in the U.S. News & World Report graduate-school rankings, citing data errors going back at least five years. It asked the law firm Jones Day to investigate.

Jones Day said in its report it found the school had intentionally misreported information to U.S. News & World Report about the selectivity of its doctoral programs.

At the direction of the former dean—Karen Symms Gallagher, who is referred to in the report as Dean 1—the school only included information on its Ph.D. program, which has a lower acceptance rate than its Ed.D. programs. The school did so despite explicit instructions in the questionnaire to include both Ph.D. and Ed.D. programs beginning in 2018, the report said.

Dr. Gallagher stepped down in 2020 after 20 years as dean and is now a professor at Rossier. An attorney representing her declined to comment on the report or its findings, but said the dean “has always been and will always be dedicated to the students who commit to USC and Rossier.” ...

The probe turned up what Jones Day referred to as “irregularities” in how the education school calculated and reported research expenditures, and it identified other possible misreporting of faculty metrics, online program enrollment, graduates’ job-placement rates and more. The law firm said those findings warrant further examination.